The amazing work a Brighton homeless charity does in turning round rough sleepers’ lives has been highlighted in a new report, as its bosses warn it is facing significant challenges.

Brighton Housing Trust runs a range of services in the city, including the First Base Homeless Day Centre and the housing container homes, which help thousands of people every year.

But although its annual report records many successes, including securing £9.2m for a six-year homelessness project along the Sussex coast and the addition of the Whitehawk Inn, the trust says the challenges it faces, particularly in public finances, are bigger than ever.

Chief executive Andy Winter, who has been with BHT for 30 years, said: “I have never experienced such change as we are currently facing.

“It is important that organisation’s like BHT remain clear about their core purpose. Over the years we have supported individuals out of poverty, exclusion and homelessness, helping them to address mental health problems and overcoming addictions, so that they can move into housing and employment, with improved health and wellbeing.

“Some of our services continue to require subsidy from our charitable fundraising to keep going, services that are absolutely essential to preventing homelessness, such as our advice services, and First Base that is at the heart of all work in Brighton and Hove tackling rough sleeping.

“I hope that the challenges being faced in public finances will not see decisions made that will result in the loss of services that, once lost, will be gone forever. The price will be paid by individuals and society for years to come.”

Chair of the BHT board Joan Mortimer said: “It is not an overstatement to say that BHT’s services are needed more now than ever before. We could not face these challenges without the support and generosity of individual donors, charitable trusts, the Big Lottery, and statutory funders.”

This year, BHT secured £9.2m on behalf of The Fulfilling Lives project, a partnership of over 60 partner agencies to deliver services over eight years to men and women with complex needs in Brighton, Eastbourne and Hastings.

The Whitehawk Inn, which provides information, advice and learning opportunities to men and women in East Brighton, became part of the trust.

However,  BHT HomeWorks, Peer to Peer, Support4Housing and Response Services were lost, some decommissioned and others given to different agencies when local authorities re-tendered the contract. 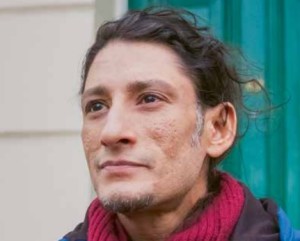 Bal moved into an Accommodation for Work project house last New Year’s Eve, and the first thing he did was make his bed and go to sleep, the first time he’d slept in a bed in six months.

It took him a month to relax out of the survival mentality homeless people develop, and he also had to eat loads of green vegetables to restore his low iron levels.

Since then, he’s kept his cleaning job, passed English and Maths courses, and completed a two-week work placement on reception at the Umi hotel, all of which has helped him build the confidence and savings to move on in the New Year.

He said: “BHT has turned my life around and I thank everyone involved for their care and support in my time of trouble.”

Sarah was sleeping rough and suffering from mental and physical health conditions exacerbated by an operation when she came to one of BHT’s advice centres in February.

She made a homelessness application to the local authority which put her in temporary accommodation while her case was reviewed.

But when the council decided she was not vulnerable, she ended up on the streets. It was only when the advice centre appealed it not once, but three times that Sarah was once again put in emergency accommodation.

The same day the council received the draft of the third appeal, drawn up by a housing solicitor, it decided she was indeed in priority need.

The trust said: “Without access to a housing solicitor, funded by the Legal Aid Agency, Sarah would have remained street homeless and her physical and mental health would have continued to deteriorate.”

Chris and Jane were taken to court by their landlord a week before Christmas over arrears which they fiercely disputed, but had not brought any proof they had paid the rent to court.

But their BHT court duty scheme adviser managed to turn the lack of paperwork to their advantage, as the landlord had no evidence of the arrears either.

She successfully persuaded the judge to adjourn the case, saving their home until at least the new year, and referring them to a BHT solicitor to take on their case.

The couple said: “The thought of losing our home just before Christmas was heart breaking, but we had already prepared for the worst, taking down the Christmas decorations and telling the children that we may not be in our family home for Christmas this year.

“Being able to go home and tell our children that we would be in our home for Christmas was the best Christmas present we could have asked for.”

Millie is a long-standing client of the BHT, having first come into contact with them 26 years ago when homeless with severe mental health problems.

She’s been helped with housing, and with the struggles of the following years. She said: “I became disillusioned by the system and by the words help and recovery. Nothing worked. I felt dehumanised by mental health services. For years I lived as a hermit.

“Then one day I realised I couldn’t go for help anymore. I had to help myself. I went to the Whitehawk Inn and did a creative writing course. It was the start for me.

“I discovered I had a bit of a flair for words. I made a couple of friends, and I got a bit of belief in myself. Computers scared me but I wanted to type up my work, like everyone else did. From there I did advanced computer courses, no easy for someone with OCD. I discovered a thirst for knowledge.”

She then started an internship with BHT, and made big efforts to impress. But then, applying for a paid position and being turned down set her back.

She said: “I was really angry. After all, I had put in such effort. I began to go into a depression. But I drew strength from the support I had gained over the years from the Whitehawk Inn, Peer2Peer and the Intern Programme. So I applied again, lowering my expectations, and got the job!”

Now, she believes her life has come full circle, and is ambitious for the future, wanting one day to work with troubled teenagers and help them in the same way she was once helped.

Ian, now 26, began experimenting with drugs and alcohol aged 12 and by 15 he was actively using heroin. By the time Ian was 19 he was living an erratic life of drug addiction, crime and homelessness at 20 he received a 12 month custodial sentence for GBH.

But last year, Ian had a lucky break, and was offered a place within BHT’s Addiction Services, and after successfully completing rehab, he joined the BHT intern programme in February, working as a hostel receptionist. The trust also helped him develop an interview strategy which focused on how much time had elapsed since his last offence.

A month before the end of his placement, Ian was encouraged by a number of colleagues to apply for a full time project worker post advertised by another homelessness organisation. After a winning interview, Ian was given the job.

While sleeping rough in Brighton, Dan was offered work by a man he met on the street, and on and off for the next ten years, he travelled around the UK and Europe with a tarmacking and block-paving gang, working long days and sleeping in a caravan.

Dan often found himself in unpleasant and frightening situations; witnessing fights, being around people with guns and machetes. He was regularly expected to steal petrol and food, and was exchanged by the gang masters to work with different gangs. Dan was never paid for this work but didn’t leave as the alternative was to go back to living on the streets. He was learning a trade, and hoped that one day they would pay him. In 2013 Dan was sectioned under the Mental Health Act. He was placed in Millview Hospital and it was at this point he was diagnosed with schizophrenia, an illness which he believes first manifested in around 2003.

After spending eight months at Millview, during which time he responded well to treatment, got plenty of rest and was able to sort out his benefits and debt problems, Dan was referred to BHT’s Phase One hostel, and slowly began to piece his life back together. He now lives in one of Phase One’s low support flats, which he shares with four other men, and is getting ready to move on. He has regained contact with his family and is hopeful he will work again in the future.

He said: “I was a mess when I first went to First Base. I would sleep in the day and walk around at night, scared of being stabbed at night. First Base is the backbone of Brighton. Everything for rough sleepers evolves around it.

“Without First Base nothing would work. It’s the first point for someone with nothing and nothing to lose, the first step to reintegrate into society. First Base provides options, as well as food, groups and activities.”