The fire in Kemp Town on Tuesday afternoon (8 December) was accidental, according to East Sussex Fire and Rescue Service.

St James’s Street was closed as firefighters tackled the blaze in the roof of the building that houses Pomegranate restaurant, in Manchester Street, Brighton.

The fire service said: “An investigation has now been carried out following a fire at a property in Kemp Town, Brighton. 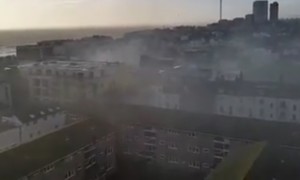 “Crews were mobilised to the scene on Manchester Street at 2.14pm on (Tuesday) 8 December after a number of calls were received reporting smoke issuing from a terraced building.

“The fire, which had ignited in the roof space of the building, was brought under control by firefighters wearing breathing apparatus and using three hose reel jets.

“Crews then spent time cutting away and damping down hotspots to avoid any further ignition.

“Following the investigation the cause has been found to be accidental and it has been confirmed that the fire started in extraction ducting which ran from a restaurant kitchen to the roof space of the building.”