He is now in a stable condition after surgery at the Royal Sussex County Hospital in Brighton.

Sussex Police said: “Witnesses are being sought to a crash on the B2123 Falmer Road, north of Woodingdean, involving two cars travelling in opposite directions.

“It happened at around 8.20am on Tuesday (29 December) and resulted in the driver of a green Ford Fiesta sustaining serious internal injuries. 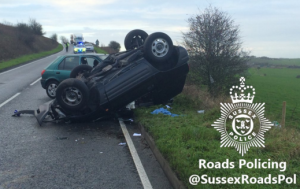 “A 50-year-old man from Brighton, he was taken by ambulance to the Royal Sussex County Hospital, Brighton, where he underwent surgery. His condition is now stable.

“The other vehicle involved, a black Toyota Rav 4, was driven by a 46-year-old man from Eastbourne, who sustained minor injuries.

“The road was closed between Brighton and Hove Albion’s Amex football stadium and Bexhill Road, Woodingdean, for two hours while the incident was dealt with.”

Anyone who saw the crash or either of the vehicles involved being driven shortly beforehand is asked to phone Sussex Police on 101 or email collision.appeal@sussex.pnn.police.uk.