The remains of a dead porpoise found washed up on Brighton beach have been reported to the Natural History Museum. 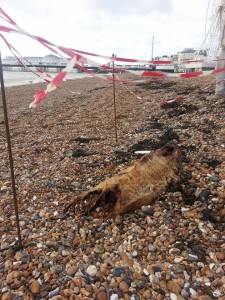 The remains of the porpoise washed on the beach

The creature was found on Thursday last week, and the area around it was taped off before it was removed.

A council spokeswoman said: “We think the dead creature is a type of porpoise and have reported it – as is required – to the Natural History Museum who manage all data and operations on live and dead strandings in the UK for the purposes of conservation.”

While the cause of death is unknown, it is not uncommon for dolphins and porpoises to be washed up on the beach following storms, such as those which hit the south coast last week.