A generous donation of almost £10,000 helped Bison Beer smash their fundraising target of £100,000 and kickstart their bid to halt Burger King’s plans to open a restaurant in Brighton’s exclusive East Street. 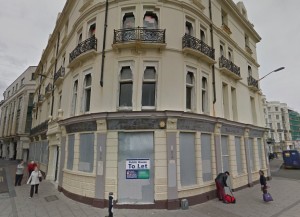 The craft beer shop’s plans to open the Bison Arms in Clarendon Mansions, at the bottom of East Street were spurred by Burger King franchisee Daryl Stutchbury’s plans to turn the ground floor into a branch of the fast food chain.

And since the crowdfunding campaign began back in November, Mr Stutchbury’s application to install air conditioning units has been refused, strengthening their chances of being able to take it over instead.

Yesterday, Bison Beer co-founder Jack Cregan joked that he was “a little bit worse for wear” after celebrating with the rest of the Bison team the night before.

He said: “I saw it unfolding on Tuesday when I was in London, from first thing in the morning we could see that there was something unusual happening.

“We have now got a meeting with Stiles Harold Williams, which is managing the lease of the building, on Friday, and we will hopefully know a lot more then.

“But we know that now we’ve raised £100,000, we are in a very strong position to go to the private landlord.

“I fell tremendously proud to be part of this city. We all talk about the fact that we are not originally from Brighton, but we just love it and this is one of the reasons we’re proud to live here.”

A spokesman for Stiles Harold Williams said it was in discussions with various parties who had expressed an interest in the Clarendon Mansions site, which used to house the Mariner Pub as well as three floors of flats above.

The Bison Arms team, which is Jack, his co-founder Nick Vardy and landlord of the Bottom’s Rest in Hove Simon Duddington, was looking to raise £99,999 in return for a 6.66% equity stake and hit its target after increasing the amount of equity on offer to 7.21%. It has now raised a total of £113,672 in return for 7.5% equity.

Two members of Nick Vardy’s family have both invested £9,340, a sum matched by the donor, who has requested to remain anonymous for the time being. Other donors have also invested large amounts, with 18 more putting up more than £1,000.

While the majority of donors are either from the city or elsewhere in Sussex, investors from all over the country have contributed.