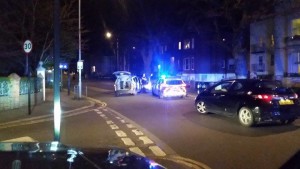 Armed police swooped on the Preston Park area of Brighton this evening after reports of a man with a gun.

The A23 into the city by the park was closed after the incident in Stanford Avenue. Nobody was hurt and a man was later arrested.

People living in flats nearby were evacuated, and it’s reported that officers were shouting at people to get out of their cars.

One passer-by said: “There were armed police, dogs, shouts for people to get out of cars. It was pretty scary.”

A police spokesman said: “At 6.23pm on Wednesday (3 February) police were called to Stanford Avenue, Brighton, after a report that man was in the street waving a handgun.

“Armed and unarmed officers attended and secured the immediate area, and a man was safely arrested without violence or injury 22 minutes later.

“Following a search of his address, a replica BB gun was seized.

“There are no reports of any injuries or damage.

“A 34-year-old man from Brighton was arrested on suspicion of possession of an imitation firearm with intent to cause fear of violence. He remains in custody.”