A biker from Brighton has been banned from the road after pulling a wheelie at almost 90mph on Hove seafront.

Daniel Botwright, 34, of Catherine Vale, Woodingdean, was caught on camera at 87mph in heavy traffic at about 3.40pm on Friday 5 June last year.

Botwright pleaded guilty to dangerous driving when he appeared before Brighton magistrates on Wednesday 27 January.

Sussex Police said: “Daniel Botwright was caught on camera overtaking traffic and performing the dangerous manoeuvre on the well-used A259 at Kingsway. 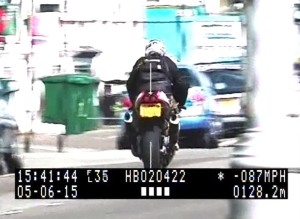 Daniel Botwright is caught on camera

“The incident occurred close to the junction of Braemore Road at 3.41pm on (Friday) 5 June and officers described there being a heavy volume of traffic and pedestrians crossing at various points going to and from the beach.”

When interviewed by police Botwright said that he had pulled the throttle back on his Aprilia bike, registration number V525 FEL, to clear a blockage. In doing so, he said, broke the speed limit although he had not intended to.

As well as an 18-month ban, Botwright was told to carry out 200 hours of unpaid work over the coming 12 months. He was also ordered to pay £85 costs and a £60 victim surcharge.

Edward Preece, of the Sussex Police Road Safety Team, said: “This was an incident of dangerous driving witnessed by the camera safety team during a routine operation in Hove.

“The A259 is a well-used stretch of road frequented by motorists, cyclists and pedestrians and Botwright was seen speeding and pulling a wheelie at a time when there plenty of other road users around.

“He was caught travelling at almost three times the speed limit and his actions could have caused devastating consequences.

“Speed limits are in place to ensure the safety of all road users and we would urge all motorists to adhere to them.”