A teenager threatened a 73-year-old man sitting on a seafront bench on Madeira Drive before robbing him of his “lifeline” mobile phone on Sunday. 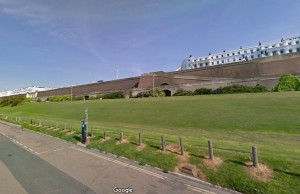 Police have launched an appeal for witnesses to the attack, which happened at 3.30pm when the victim, who was sitting on a bench at Duke’s Mound, was approached by another man who threatened to harm him before taking his phone and making off on foot towards Brighton Marina.

The suspect is described as white, around 18, 5ft 10in, and of medium build. He was wearing a black baseball cap with red edging, a black jacket and blue trainers. He was with a white woman who was not involved in the incident.

Detective Sergeant Chris Lane, of Brighton and Hove CID, said: “The stolen phone had no particular material value, but to the victim it was a lifeline as he suffers from ill health.”

He added: “This was an abhorrent attack on an elderly and vulnerable person, and if anyone saw what happened or can identify the suspect, I’d urge them to get in touch without delay.”

Alternatively, contact can be made with the independent charity Crimestoppers anonymously on 0800 555111 (www.crimestoppers-uk.org).