An electrician working at the Grand Hotel was treated for electrical burns yesterday after a fuse box shorted, causing a power outage which lasted about nine hours. 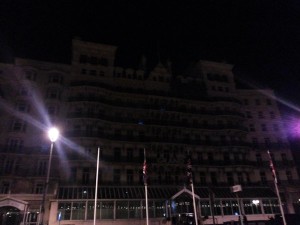 The contractor, a man in his 30s, suffered an electric shock just before 6pm yesterday. He was treated for burns to his face, arms and chest before being taken to hospital, and has since been discharged and is now recovering at home.

About 170 guests were found rooms at other Brighton hotels following the incident, which plunged the Grand into darkness until about 3am.

General manager Andrew Mosley said: “Yesterday afternoon there was maintenance work being carried out to the power supply by a contractor who came to the site.

“Unfortunately he was involved in an incident and required medical attention. He has subsequently returned home. First and foremost we are concerned about him and wish him a speedy recovery.

“The incident resulted in a lot of power through the hotel which was restored at about 2.30 to 3am.

“We decided that we would not be able to provide service and accommodation to customers, and ahead of that we had their safety in mind.

“It also demonstrated the shoulder to shoulder approach that the local hotel community has got – we are all competing for business, but when it comes to an incident like this, we stand united.”

A spokesman for South East Coast Ambulance service said: “SECAmb was called shortly before 6pm yesterday (13 April) to this incident and reports a man in his 30s had suffered an electric shock. Ambulance crews in one ambulance and one car attended the scene and the man was treated for burns to his face, arms and chest before being taken to Royal Sussex County Hospital.”

A spokeswoman for East Sussex Fire and Rescue said: “At 6pm on 13 April, three appliances from Preston Circus were mobilised to Kings Road, Brighton after reports of a smoking fuse box.

“Crews isolated electrics and used a thermal imaging camera to ensure that there was no fire. One adult male who has suffered electrical burns was left in the care of South East Coast Ambulance Service. Firefighters left the scene at 6.27pm.”

A spokeswoman for UK Power Networks said: “We were made aware last night of an incident at a property in Kings Road, Brighton, which had caused our equipment to operate for safety reasons. We attended to ensure everything was made safe and to help restore power.”