The Bilingual Primary School celebrated its official opening in its new Hove home with a song and dance yesterday – in Spanish, of course.

Children from the school, which is next to Hove Park, danced flamenco-style and sang a couple of songs for a hall full of guests, including Brighton and Hove mayor Lynda Hyde.

Councillor Hyde said: “If enthusiasm and commitment could get this school an Ofsted ‘outstanding’, you’d have got it already.” 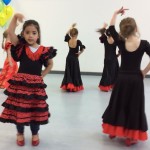 The mayor praised foresight and determination of the founders in setting up a bilingual school, adding: “I only wish I had such an opportunity when I was young.”

The head Wendy King, who is running her third Brighton and Hove school in 16 years, said that she was excited about the amazing potential now the school had a permanent home.

It moved to The Droveway, Hove, after more than three years in temporary premises at BACA – the Brighton Aldridge Community Academy – in Falmer. 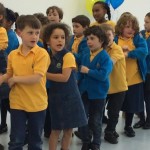 Ms King thanked all those who had been involved from the start to those who added their support along the way and to those who would help in the future.

She quoted founder and the former chair of governors Marina Gutierrez saying: “It started as a conversation between a group of parents saying why don’t we start a Spanish school.”

She acknowledged some anxieties about free schools, concerns about the changing role of local authorities and worries among the neighbours. But on every count she said that the school was keen to play a positive part in its local communities. 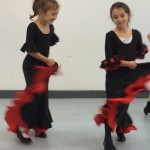 Mrs Gutierrez, now one of the two vice chairs of governors, thanked – among others – “the lovely people at BACA”, architect Paul Jacobs, inspirational head Wendy King and the children themselves.

She said: “Aren’t they brilliant! The confidence and pride with which they are using both languages (English and Spanish) is wonderful. The future is bright for them.

“This school is a testament to what can be achieved by a community with a shared vision and a passion for a great future.

“The inspiration for our school came from the children, watching them develop their language skills, as well as parents recognising the importance of the need for their children to grow up in a world where they can communicate and show tolerance towards others different to themselves.” 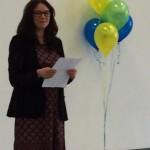 She praised the “tremendous commitment and dedication” of the founder parents and handed over to her successor as chair governors Maggie Carroll, who began her speech in Spanish.

The school’s new home has enabled it to take extra pupils from September and there are about half a dozen places available for reception age children in September. 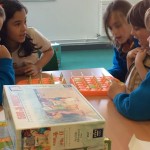