Mr Kyle said: “So far the Secretary of State has not grabbed the opportunity presented to him from across the House – I am talking about a cross-party solution – with both hands.

“If patients were at the centre of his thinking, he would have done so.

“He has told the House that he has not done so, because he read about it in The Times rather than getting a phone call.” 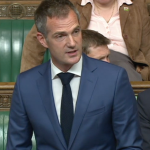 The Labour MP for Hove added: “If Norman Lamb agrees to call his mobile and tell him anything that he wants to hear – whisper sweet nothings into his ear – will he agree to have the conversation and call off this strike?”

Mr Hunt said: “I have to say that the right honourable gentleman never whispered sweet nothings in my ear and he certainly has not done so since being in opposition.

“With regard to doing what it takes, let me tell the honourable gentleman directly that we have been trying to solve this problem for three years, with 75 meetings, 74 concessions and three independent processes.

“We have been doing everything we possibly can to solve this problem. What we have is a very intransigent and difficult junior doctors committee of the BMA, which has refused to negotiate sensibly.

“In that situation, the Health Secretary has a simple choice: to move forward or to give up. When it comes to patient safety, we are moving forward.”