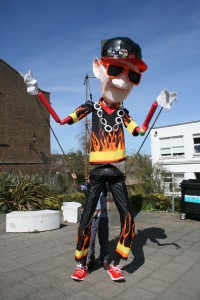 Freelance artist Paul Render put the finishing touches to the effigy today, and took him for a test ride outside the Same Sky studios in Belmont Street this afternoon.

Although the puppet was originally intended to be part of one school’s section of the parade, he will now be making an unaffiliated appearance.

Mr Render said: “One of the parade sections is the celebrities of Brighton and he was a suggestion and we thought that was a fantastic idea.

“The school changed its mind, but when we heard he was ill it seemed that it would be a great idea to make him after all.

“Just like the original, he’ll be doing the Children’s Parade just for the love of it.

“It’s taken me three days over the bank holiday weekend, and he was finished today. It’s been a challenge as he needs to be able to dance.  He’s got skis attached to the end of his feet so that when I lift my legs, he lifts his.

“It will be my pleasure to operate him – if you make it, you carry it.”

Disco Pete, whose real name is Pete Turner, has been a fixture at music events throughout the summer in Brighton and Hove for many years now.

This year, it was revealed that for health reasons, the best of his dancing days may be behind him.