A man and woman from Woodingdean are among 12 people charged with conspiring together to smuggle drugs and phones into Lewes Prison. 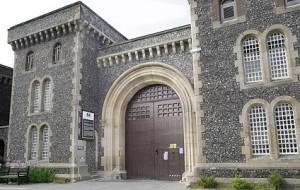 Four prisoners, a prison officer and seven members of the public are due to appear at Brighton Magistrates’ Court today as a result of a joint police and prison service operation.

They include Sheryl Donegan, 30, and Daniel Sallis, 30, both unemployed of Bexhill Road, Woodingdean.

The 12 people have all been charged with conspiracy to convey prohibited articles into Lewes Prison between 18 June 2014 and 10 September 2015.

Other offences included having and using mobile phones within the prison.

During the course of the investigation, small quantities of cocaine, cannabis, steroids, NPS and mobile phones were seized from both inside and outside the prison.

Henry is also charged with one offence of using a mobile phone inside the prison.

Sallis is also charged with one offence of using a mobile phone inside a prison.

Detective Inspector Till Sanderson, of the Sussex Police Serious Organised Crime Unit, said: “This investigation, carried out in conjunction with staff at Lewes Prison, has focused on intelligence about attempts to undermine the effective working of the criminal justice and rehabilitation system.”