Opposition to a new care home in Patcham has started weeks before a planning application has even been submitted – but the developers say the home is badly needed. 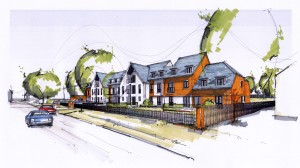 A public meeting held last week to protest the plans had to be relocated to All Saints’ Church at short notice after 150 people turned up to hear councillors and officers speak about McCarthy  and Stone’s plans for a 44 flat care home in Old London Road.

The proposals involve knocking down five family homes opposite Patcham House School to build a home which residents say is too large, ugly and will lead to increased traffic and parking pressure.

But the developers argue that Brighton and Hove needs hundreds more three times as many care homes as it currently has, and building more will free up more family homes in other parts of the city.

Ward councillor Geoffrey Theobald, who spoke at the meeting, said: “I couldn’t think of a more inappropriate place to build a large care home such as the one that McCarthy and Stone is proposing.

“Quite apart from the loss of much-needed family homes, this large building would be completely out of character with the Conservation Area. I shudder to think of the problems that would be caused by all the extra traffic it would generate.

“We just need to look at what has happened at the nearby Maycroft Manor care home on Carden Avenue to get some idea. In addition, as many residents pointed out last night, this part of Patcham is already highly prone to flooding and so is entirely unsuited to a large new building housing extremely vulnerable older people.

“I agree with the 150 residents who turned out for last week’s public meeting – McCarthy and Stone must abandon these ill-thought out plans and find a more suitable location.”

The meeting was organised by campaign group Protect Patcham, which already has a website up and running to protest the plans, which were the subject of a public consultation held by the developers last month.

A spokesman for McCarthy and Stone pointed to the council’s extra care strategy, which acknowledges the need for extra care housing to cater for the 14,000 or so people aged 80+ in Brighton and Hove.

He added: “Furthermore, data from the Housing and Learning Improvement Network shows that there are only 263 units of this type available across the whole of Brighton and Hove. The same data estimates that the area requires 819 units to cater for the current market.

“It is important that a community needs to meet the housing needs of all its residents. This development would provide local older people the opportunity to downsize while still remaining in the area, which will free up family homes for the younger generation.”

“Our consultation with the community is an on-going process and we have already made amendments to these proposals following initial meetings by reconfiguring the building slightly, resulting in the loss of two apartments.

For more information about the proposals, visit www.mccarthyandstone-consultation.co.uk/patcham