Bugs will be on the menu at a Brighton Fringe Festival event tomorrow as experts debate the future of food. 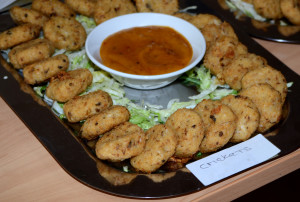 More than 1,900 species of insect already feature in human diets around the world and with cricket flour already being sold in Sussex, replacing sausages and burgers with crickets and mealworms could be closer than we think.

But are edible insects in fact just another ‘techy fix’ or ‘fad’ that will bring as many problems as solutions for the environment and public health?

That is the challenge facing researchers in the University of Sussex’s Science Policy Research Unit (SPRU) and the Institute of Development Studies (IDS), who are co-hosting a public event on Wednesday 18 May in Brighton to discuss the current food system’s impact on the world’s resources and look at possible alternatives.

Chaired by Tom Clarke, Science Editor of Channel 4 News, the event will involve academics from both organisations, alongside representatives from two other local food initiatives; SILO and the Brighton and Hove Food Partnership.

The speakers will discuss a range of issues, including edible bugs and better resource efficiency, with questions from the audience too.

Dr Dominic Glover, Research Fellow at IDS, said: “Edible insects are already coming onto the market as an alternative feed for farm animals and fish; they are even sold as human food in some major supermarkets in European countries.  Soon they could be on your dinner table alongside other protein foods based on algae and fungi.  You could even raise them at home.  It’s not too early to ask:  Would you eat them?  If so, how?  If not, why not?”

But if bugs aren’t your cup of tea, how else can we adapt our eating habits so that we consume in a sustainable manner? Should we change our food expectations – to incorporate ‘hungry gaps’ – or do we need to take a much deeper look at technological innovations?

Professor Erik Millstone, Professor in Science and Technology Policy at SPRU, said: “Scientists, technologists and corporations propose innovations that they think will be incredibly useful, straight forward and unproblematic, but many turn out to have problems that the proponents never bothered to think about (although others may have raised issues).

“Therefore, developments in the food system need to be judged not just in narrow technological terms – i.e., does it work? – but as a result of a thorough review of their safety and impact on the wider social and biological environment.”

Celebrating their 50th anniversaries this year, both IDS and SPRU have spent the past half-century working to address contemporary major challenges in development, sustainability and science, technology and innovation. This important milestone offers the opportunity to reflect on the past and look to the future – in terms of challenges and solutions to these problems. It is not only businesses and governments who are key stakeholders in future policies, but also consumers as users need to be involved, as well as citizens and civil society.

The free Brighton Fringe event tomorrow from 6-7.30pm – titled ‘Future of food: burgers…or bugs?’ – represents an opportunity to enable this wider debate among the general public.