Fourteen people were arrested in the space of ten minutes as protesters gathered for a march and counter-protest in Brighton today (Saturday 4 June).

Sussex Police said that about 300 people took part in a march through the centre of Brighton and that they had all dispersed peacefully.

The march – No To Refugees – faced a counter-protest from a group calling itself Stop the March for England.

There were concerns that nationalists would be in town on the day of the Kemp Town Carnival and while a skinhead rally was taking place. Some of the skinheads were at pains to point out that they were anti-racist and had gathered to listen to ska music. 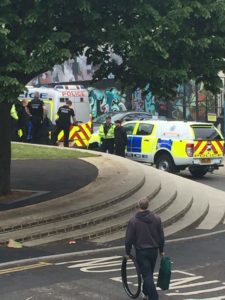 Sussex Police said: “A demonstration which started in Brighton this morning (Saturday 4 June) has now concluded.

“At its peak, an estimated 300 people were involved in a march through the city centre before it finished at Brighton Railway Station at about 12.30pm.

“In order to minimise disruption to traffic, public transport and pedestrianised areas, police continued to monitor a number of protesters who remained in the city after the majority had left.

“However, these individuals dispersed in small groups throughout the afternoon.”

Brighton and Hove police commander Nev Kemp said: “We made 14 arrests within 10 minutes of being called to an incident this morning and I think that reflects our approach towards demonstrations – we are always happy to facilitate peaceful protests but incidents of disorder and criminal activity will not be tolerated.

“We have had a lot of positive feedback from members of the public and consider the operation a success.

“Despite the clear intent of some taking part – to commit offences and create disorder – we have had no reported injuries or significant damage or disorder.”

Chief Superintendent Kemp added: “I would like to thank the public for their support and also my officers and staff who worked hard over several hours to keep the people of Brighton and Hove safe.”

Fourteen people were arrested in connection with an assault in Ship Street at about 9.30am.

No injuries have been reported and a number of witnesses are assisting police with inquiries.

Anyone who saw the incident is asked to phone Sussex Police on 101 or email 101@sussex.pnn.police.uk, quoting Op Medland.