Labour has been slated for a u-bend u-turn by three Hangleton councillors campaigning to keep toilets in their ward open to the public.

Their plea was turned down by Labour’s deputy leader Gill Mitchell who blamed a £40,000 shortfall in the council’s budget.

But she was accused of backtracking on an earlier pledge by the three Conservatives who want to save the toilets in Greenleas park and by the Grenadier pub in Queen’s Parade, Hangleton Road.

Councillor Mitchell, who chairs the council’s Environment, Transport and Sustainability Committee, said this week: “The only way that savings of that magnitude can be realised is by either reducing opening hours or by closing some sites completely.”

But the three Tories said: “Faced with the closure of a toilet in our busy local shopping centre and partial closure of another during the winter months, when it is used extensively by sports teams, we have mounted a campaign to ‘Save Hangleton toilets’.

“But it appears that the Labour administration has decided they are not as important as, apparently, they once thought they were – mainly when they are trying to win an election.

“During the Westbourne by-election they rolled out Hilary Benn to lend his support to the party’s candidate by starting a campaign called ‘Leave Our Loos Alone’, saying that the Greens intended to cut £163,000 from this area in the budget. 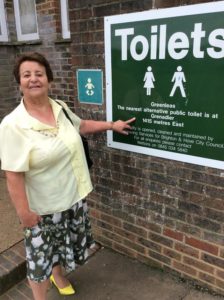 Councillor Dawn Barnett outside the public toilets in Greenleas. The sign directs people to those at the Grenadier shops, which are also to close

“Councillor Gill Mitchell said at the time of the by-election, ‘Toilets are a basic public service and are essential for parents of young children, older people and people with medical conditions such as diabetes.

“‘I’m pledging today that the Labour ad Co-operative Group will vote to stop any toilets in Brighton and Hove closing when the Greens bring their budget of cuts to council.’

“On Tuesday this week (28 June), faced with the ‘Save Our Toilets’ campaign, she had changed her tune. She should now reconsider this cruel act.”

The three Hangleton and Knoll councillors said that there 71 football matches at Greenleas last season, with teams paying to hire the pitch but being left with nowhere to go.

They said: “Some of the teams come from places like Burgess Hill and Eastbourne. They need somewhere to change and somewhere to go the toilet otherwise some of them might end up going in the bushes.”

The council would lose pitch hire revenue if clubs switch to locations with changing rooms and toilets, they said. 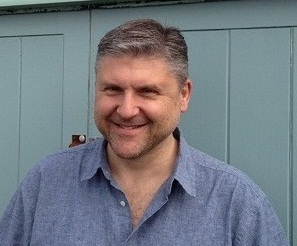 And they added: “A lot of older people do their shopping at the Grenadier. Some of them have bowel or bladder problems and those who’ve got a car may now have to go to Sainsbury’s or Tesco. So the shopkeepers at the Grenadier will lose out.”

If even one shop went out of business, they said, the council would lose thousands of pounds a year in business rates.

Councillor Barnett said: “It’s a basic need and that’s what people pay their council tax for.

“I don’t want to hear that it’s budget cuts because they waste plenty of money on other things. Look how much they spend clearing up after travellers.

“The sign at Greenleas says the nearest alternative toilets are at the Grenadier about a mile away but they’re also being closed. It’s ridiculous.”

Both the Greenleas and Grenadier toilets were well used and they’re spotless, she added.

Councillor Janio said: “Folks often ask ‘what has the council ever done for me?’ I often reply that apart from transport, planning, public safety, social care, libraries, waste management, trading standards and many other issues, such as the provision of toilets … almost nothing!

“A council should get the basics right. If it can’t even keep our toilets open, what is it good for?”