A forensic artist’s help has been enlisted to try and find the identify of a man whose skull was found by fisherman in the English Channel this month. 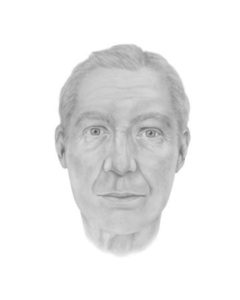 Fishermen made the gruesome discovery on 12 September when they dredged it up off Newhaven. They brought it into Shoreham when they landed the following day and local police officers took possession of it.

Forensic examination has shown that it is the skull of a man, believed to be in the overall age range of 30-71 at the time of death, but most likely to have been 40-60.

Extensive enquiries have been made, including checks with the National Crime Agency’s UK Missing Persons Bureau and with the national DNA database, but no information has yet been obtained that would identify the man.

Sussex Police asked the Missing Persons Bureau for further help and they engaged forensic artist Anneli Pilsbury who has produced this impression based on an assessment of how the man would have appeared.

The case is regarded as unexplained but not suspicious. The area in which it was found is a recognised lawful sea burial area so we think the skull could have come from a burial at sea.

It is hoped that some family members may feel this comes from a loved one buried there, or perhaps from a missing person they have previously reported.

It’s not known how long the skull might have been in the water.

This will enable work can be done with them to confirm the identity (or otherwise) and then if confirmed allow them to arrange a proper family disposal and tribute as they see fit.