A new report into how Brighton and Hove’s food banks are used has shown that soaring housing costs and changes and delays in benefits are hitting large families the hardest. 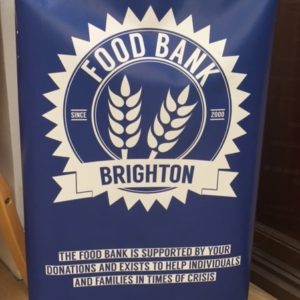 Families with three or more children are struggling the most as they sink into food poverty thanks to a perfect storm of low wages, delayed or slashed benefits, unemployment, debt and high housing costs.

The Brighton and Hove Food Partnership report also showed that there had been a slight rise in the number of food parcels given out by the city’s 15 food banks each week, from 289 last year to 298 this year.

Now, the partnership is looking at ways it can support these families effectively in the long term, as well as providing emergency help at times of need.

BHFP Director Vic Borrill said: “There are many people who are struggling around food, often day in, day out, who are unwilling or unable to access a food bank.

“Food banks are only meant for short term emergency use. The much larger number of people who live with long term ‘household food insecurity’ are the focus of our city’s ambitious three year action plan to tackle food poverty.”

“The next step is to build on this work with schools to improve their referrals to both food banks and to other longer term solutions.”

Volunteer at the Purple People Kitchen Food Bank in Portslade Ann Menhinick said: “Large low income families are finding it hard to provide enough food for their children at weekends and during the school holidays. They rely on free school meals to offer a stopgap in their meal plans during term time.

“We regularly get requests for extra food from those with large families, especially when there are teenagers in the home.”

The annual report was released to coincide with an event to celebrate the achievements in the first year coming out of the action plan, which involves more than 50 organisations working together to tackle issues which force people into hunger and food poverty.

Vic Borrill added: “We want to become ‘the city that cooks and eats together” so we are delighted with both the expansion of Chomp school holiday lunch clubs for children and families who would normally be eligible for free school meals, and the launch of ‘Casserole Club’ to help local people share a meal with a vulnerable neighbour.”

The report, which for the first time looked in depth at why people are resorting to food banks, was commissioned as part of the Food Poverty Action Plan ‘One Year On’ event taking place yesterday (Mon 17 Oct).

Brighton and Hove Food Partnership stress food bank use is just the tip of the iceberg when it comes to food poverty, with previous research estimating 23% of people in the city, or almost a quarter of residents, have trouble paying for basic costs including food.

The Food Partnership which carries out a range of projects such as supporting community gardens, running healthy weight programmes and tackling food waste as well as food poverty, stress there is still a long way to go. 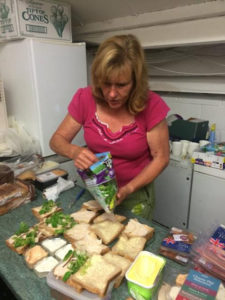 Volunteer at the Purple People Kitchen Food Bank in Portslade Ann Menhinick described how larger families are trying to cope with not enough food.

She said: “Large low income families are finding it hard to provide enough food for their children at weekends and during the school holidays. They rely on free school meals to offer a stopgap in their meal plans during term time.

“We regularly get requests for extra food from those with large families, especially when there are teenagers in the home.”
“They fill their children up with bread, pasta and potatoes as protein like meat, fish and cheese and fresh food are expensive luxuries. Many of the parents are inventive and resourceful and can make basic ingredients stretch.

“Some share shopping and cooking with neighbours and almost all of them are teaching their children how to make simple economical meals. Washing powder, shampoo and soap are a luxury for many families.

“Women go without the basics in order to provide for their children. We support them in every way possible by setting aside special items of food for the large families. By also providing secondhand clothes and household items we take the strain off their limited budgets. Just having us to turn to enables many of them to relax in the knowledge someone is there to support them.”