A thief stole a bank card from an 83-year-old Brighton woman before emptying her account of £2,500.

Sussex Police published a CCTV picture today (Friday 28 October) and said: “Police are hoping to trace this man they believe to be connected to the theft of a bank card and money in Brighton.

“Officers were called around 2.30pm on Thursday (October 27) to a report a card had been stolen and then £2,500 taken from the account.

“The victim, an 83-year-old woman from Woodingdean, had withdrawn cash from a cash point in Barclays in North Street at around 12.25pm.

“She was then approached in the street at around 12.45pm while walking to Marks and Spencer by a man carrying a bunch of flowers who asked her if she would help him choose a present for his mother.

“He accompanied her to Marks and Spencer and, after she tried on a couple of coats, left suddenly, giving her the flowers. 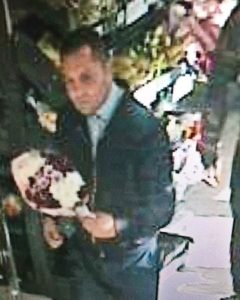 “The victim realised her card was missing. She returned to Barclays and found £2,500 had been withdrawn from her account.”

PC Andrew Boucher said: “We would like to speak to this man in connection with the theft and are hoping someone might be able to identify him.”

Anyone with information is asked to phone Sussex Police on 101 or email 101@sussex.pnn.police.uk quoting serial 764 of 27/10.