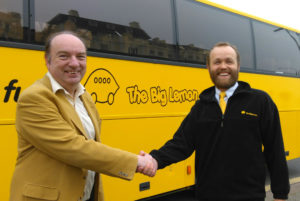 Mr Baker, the Liberal Democrat MP for Lewes from 1997 to 2015, aims to steer the environmentally friendly bus business to even greater success.

He served as Transport Minister from 2010 to 2013 and had responsibility for buses and trains. Now he’s switching from policy to practice.

His appointment is part of the Big Lemon’s ambitious plans to set up a national network of locally owned social enterprises providing affordable public transport. The aim is to have zero-emissions vehicles powered by renewable energy.

The company – a community interest company or CIC – was 10 years old earlier this year and is known for running its fleet of yellow buses on waste cooking oil from restaurants.

From next month it will start running electric buses with the first two vehicles to be powered by solar energy generated on the roof of the bus depot. 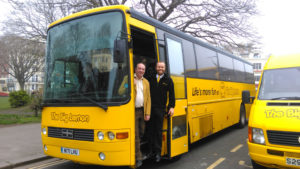 Mr Baker has served as the chairman of Bus Users UK since leaving politics. He has worked closely with chief executive Claire Walters to raise the profile of Bus Users and help steer the organisation towards becoming a more diverse and representative body.

He said: “I am delighted to be joining the Big Lemon which has gone from strength to strength in recent times.

“I feel particularly at home with its strong environmental approach, showing you can run a successful business in an ethical manner.”

Tom Druitt, founder and chief executive of the Big Lemon, welcomed Mr Baker’s appointment, saying: “Norman has dedicated his life to his community, serving the people of the Lewes area for many years as their MP and more recently bus users across the country as Transport Minister and latterly as chair of Bus Users UK.

“We’d be hard-pressed to find a stronger campaigner for better and more sustainable bus services to lead our organisation in Brighton and Hove – and we’re very much looking forward to working together”.