All three Brighton and Hove MPs were safe after a terror attack at Westminster this afternoon (Wednesday 22 March) in which a police officer and a woman were among four dead.

Hove MP Peter Kyle has told how dozens of people rushed for safety into Portcullis House as he was leaving his parliamentary office there opposite the House of Commons.

Brighton Kemptown MP Simon Kirby and Brighton Pavilion MP Caroline Lucas were in the House of Commons and were about to vote. Along with hundreds of other MPs, they were told to stay in the Commons chamber as Parliament went into lockdown.

Mr Kyle posted a Facebook message about the incident in which he also thanked everyone who had been in touch to ask after his safety.

Then the man, armed with a knife, stabbed a police officer dead before being shot and killed in the grounds of the Palace of Westminster. 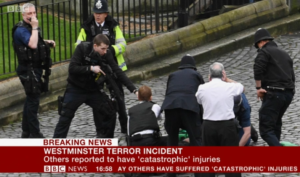 Mr Kyle said: “Thank you to everyone sending me messages at the moment. It’s unbelievably kind of you to ask after me.

“I was on my way to vote and passing through Portcullis House when I suddenly heard the noise, shouting and then security doors open to allow the public to rush in to find safety.

“A group of us came straight back to the office I share with Wes Streeting, MP for Ilford North, and that’s where I am now as the building is in lockdown.

“Ever since I became an MP I’ve always been very aware of the women and men in front of the building I work in, putting themselves in harm’s way to keep people like me safe. It makes me feel incredibly humble and words cannot describe my gratitude.

“My job right now is to sit quietly in my office and allow these brave officers to do their job. Sitting as I am right now so close to where terror is unfolding, my heart is aching for those outside who are suffering.”

Locked in Commons with fellow MPs. Thoughts with innocent people hurt today and thanks as ever to Police & other staff working so hard here.

Caroline Lucas said: “Our thoughts go out to all those affected by today’s attacks and we send deep thanks to the public servants who responded so quickly, bravely and with care to treat the injured and minimise the number of casualties.

“We pay tribute to the lives that were so sadly lost and in particular to the police officer who died in the line of duty. We are truly in his debt.

“The response to such a heinous attack must be to strengthen our democracy and refuse to give in to those who would harm it.”