A Hove tabby had to be rescued in a three-hour operation after becoming stuck firmly wedged between two walls so tightly he struggled to breathe. 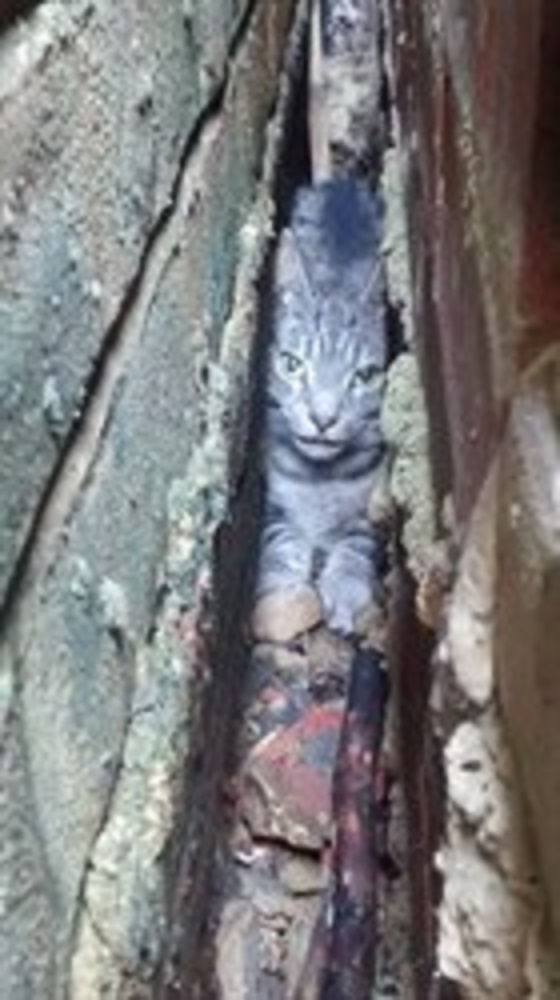 Albums, the three year old tabby cat, had become tightly stuck between an office building and an external wall in Coleridge Road, Hove.

The owner of the building called the RSPCA and animal collection officer (ACO) Julie Parsons attended to try and free the cat.

She said: “Poor Albums was stuck very tightly between two walls with about a four inch gap. No one knew how he managed to fit in there in the first place.

“It took about three hours, working with East Sussex Fire and Rescue to create a huge hole in the wall to free him.

“He was struggling to breathe where he had wedged himself so tightly between the walls so time was of the essence. However, due to his position firefighters had to make the hole by removing each brick individually and catching each one so that they didn’t land on top of him and hurt him.”

Just when it looked like Albums had used all up of his nine lives, one last tug saw the moggy freed.

ACO Parsons continued: “I’d like to say a big thank you to East Sussex Fire and Rescue Services for their assistance. We’re always incredibly grateful for any help we receive from them and, in this case, their help ensured we were able to save Albums and reunite him with his owner.

“He was covered in dust and had dust in eyes but apart from that he was fine.”

Watch Manager Nick Oliver-Taylor at Hove Fire Station said: “Crews were called to an address in Coleridge Road, Hove, to assist the RSPCA in releasing a domestic cat from an entrapped position between two 10 foot high walls in an approximately 3-4 inch gap. It was not possible to reach the cat who was stuck about eight feet from either end.

“The crews worked painstakingly for three hours to disassemble the interior of an office space and remove parts of the wall by hand- brick by brick – in order to release the cat unharmed.

“My thanks goes to the staff of the local business for noticing the cat in the first place, and for their compassion and consideration in allowing us to use their premises, as this was the only way we could carry out the rescue.

“Thankfully, with the support of the RSPCA the cat was able to be reunited with its owner with no lasting effects.

“As a matter of course East Sussex Fire & Rescue Service will not rescue a cat stuck up a tree, unless requested by the RSPCA, as it is not classified as being ‘physically trapped’. However, in a circumstance such as this, when the animal is clearly in distress and unable to escape, we will attend.”

An RSPCA spokesperson added: “When cats get stuck up trees, in a vast majority of cases, they can get themselves down and trying to rescue them can actually put them at risk as they may fall or jump trying to escape.

“That’s why we would normally ask owners to try and tempt their cat down with smelly treats or fish in the first instance and keep a close eye on them.

“If after 24-hours the cat still appears to be stuck, or if something changes in the meantime, we’d ask owners to call back and we will do what we can to help.

“We receive more than a million calls for help each year so we may ask owners to contact a tree surgeon if we are unable to get someone to them to help or if the cat is stuck in a position where our officers would not be able to help.

“There are always exceptions to the rule, for example if weather conditions are particularly bad or if the cat is injured or very young.

“Worried owners can call the RSPCA in the first instance on 0300 1234 999, and we can contact the fire services to ask for help if necessary.”