A Brighton ‘yarn anarchist’ has employed her knitting needles to create a blanket which welcomes refugees into the city – and hopes to use it to raise money to house refugees. 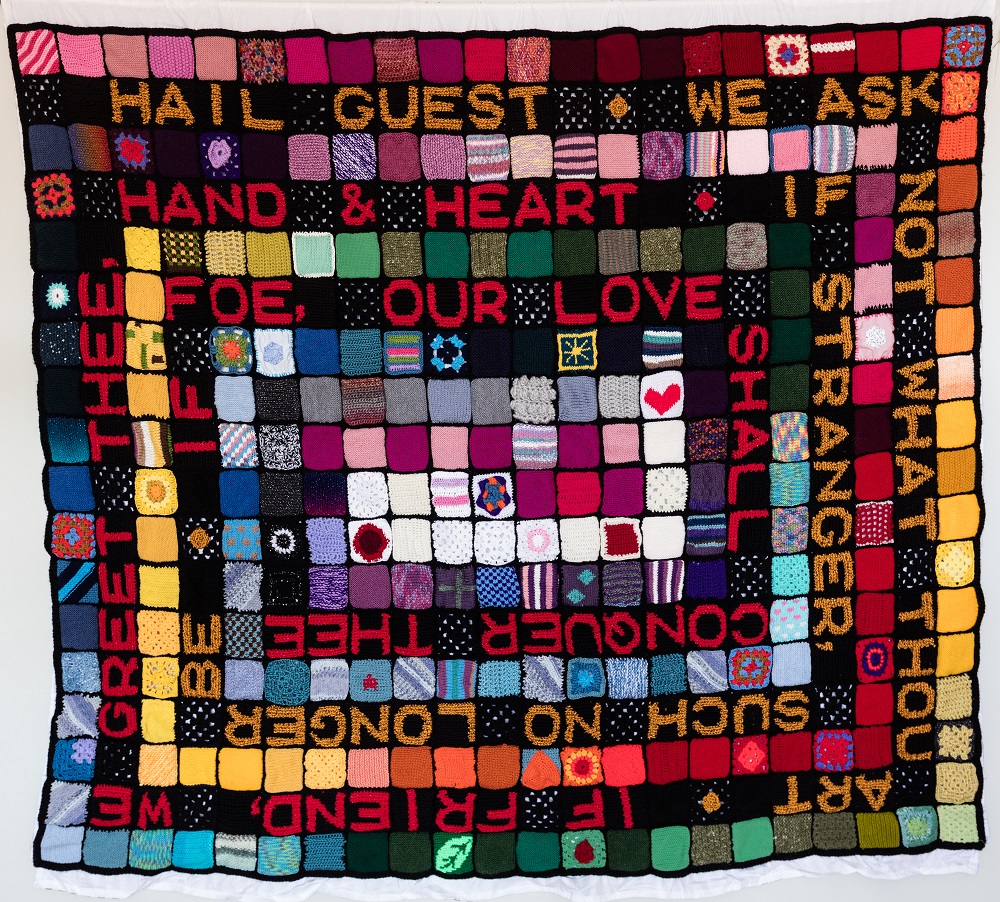 Dani Ahrens’ artwork is currently on display in the window of Community Base in Queens Road, where it will can be seen until Monday, before moving to Brighton Dome where it will be displayed as part of the Black History Month Family Day on October 15.

Dani’s community woolwork has previously been seen around Hanover, where she has knitted ladybird covers for cars and woolly hat dispensers.

The Welcome Blanket was a collaborative effort, with textile squares contributed by 30 other knitters. It also incorporates a verse which is inscribed on one of the Patcham Pylons at the entrance to the city:

Hail Guest. We ask not what thou art
If friend, we greet thee, hand & heart
If stranger, such no longer be
If foe, our love shall conquer thee

Dani said: “For many residents of Brighton and Hove, this sentiment rings true – the city has always been famous for its open and accepting character.

“However, according to local charity Thousand 4 £1000, dozens of refugees and migrants in the city are trapped by legal and bureaucratic systems which mean they cannot prove their right to stay in the UK but are also unable to leave.

“For some, their country of origin has been declared officially unsafe and they cannot be deported there. For others, their travel documents are not accepted by the country the UK government says they must go to.

“It’s a harsh welcome for people who have often been forced to leave their homes due to war and persecution.

“Thousand 4 £1000 aims to provide a warmer welcome for people in this situation, by raising funds to provide safe and stable homes, from which they can be supported to resolve their immigration cases.”

The charity is hoping that the Welcome Blanket will attract hundreds of new supporters to their cause. People are invited to sponsor a square of the blanket by donating £10 or giving £1 a month to the group, before October 23rd.

For full details of the project and how to donate, visit www.rebelyarns.com/welcome-blanket