A Brighton man was so moved by a flyer through his door pleading for donations to the Save Madeira Terraces crowdfunder, he put a personal cheque for £9,000 in the post. 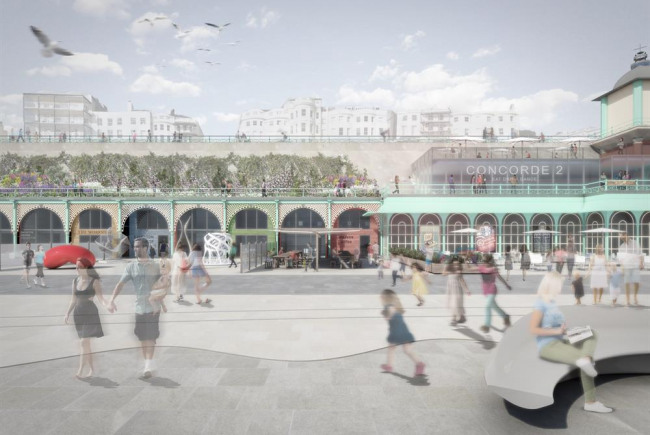 Raymond Brill’s pledge was added to the fundraising total today, bringing the amount pledged to over 75% of the target, which currently stands at £423,679.

And it was swiftly followed by another large personal donation, £10,000 from Mark Henry. These and other recent donations, including £8,000 from Brighton Marathon organisers The Grounded Events Company and and £5,000 from events catering company Crown Partnership means there is about £80,000 left to raise.

The only bigger donation by a private individual was £10,000 pledged anonymously three months ago.

Christopher Goss and Russell Miller are neighbours who have been lobbying local businesses, leafleting and using social media, as well as sending hundreds of emails to try and attract pledges.

Chris said: “1,500 pledges is a strong testimony to our community’s love and support for these iconic arches. Most of these pledges are from local individuals like us who have dug deep into our pockets.

“We now hope that the business community will increase its pledges to enable the campaign to reach its funding target. Renovation of the terrace should be the catalyst for the long overdue regeneration of Brighton seafront from the Palace Pier to the marina.”

The city council now hopes businesses will follow Mr Brill and Mr Henry’s example and make larger pledges to bring the total over the target amount as under the terms of the crowdfunder, the money will only be released to the council if this is reached.

Howard Barden, head of the city’s tourism unit, VisitBrighton, which is leading the campaign, says: “The campaign has ignited a sense of civic pride around improving the seafront and has seen a number of residents make it their mission to see the campaign succeed.

“Support for the terraces to be restored is evident and we’re now hoping to see businesses step up with some larger pledges in the last couple of weeks. We have done phenomenally well but there’s still a lot more to raise.”

The target changes as new donations come in according to what transaction fees are charged on the pledges, as it includes estimated fees. Different methods vary widely, with PayPal being the most expensive.