The amount that organisations are charged for holding events on Brighton and Hove council land varies hugely, according to opposition councillors who are calling for a clearer fee structure. 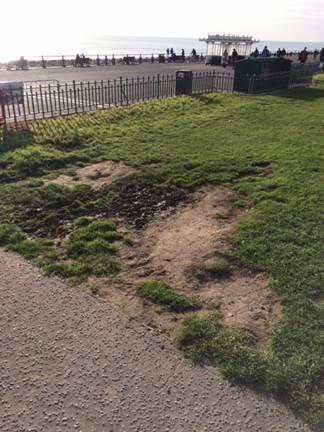 The city’s Green councillors have asked for a range of changes in how events are handled – and one issue they’ve raised is how different events are charged “vastly different” fees.

And Cllr Tom Druitt says he is particularly concerned that on at least one occasion, a corporate company was given the charity rate because it has a charitable arm – even though it wasn’t that arm which was booking the event.

Cllr Druitt said: “We saw last year’s fees that were levied on different events. They’re not in the public domain and it’s obviously commercially sensitive so it can’t be.

“But very similar events are being charged vastly different amounts depending on how well they have negotiated with the council.

“The council charges different amounts depending on whether the event is a community, charity or corporate event. Corporate customers have sometimes managed to get a charity rate on something down to the fact that they have a charitable arm.

“Lots of companies have a charitable arm and that’s wonderful, and they do lots of good work, but it’s very different from a actual charity which does charity work with 100% of its resources.

“The whole thing is inconsistent and we were asking for clarity. We want a much more fair and constructive fee structure so that event organisers have confidence that they are being charged a fair rate and there aren’t other events that have negotiated a better rate than others.

“At the moment it’s very haphazard.”

The Greens proposed a wide-ranging motion on how events are managed at the last meeting of the tourism and development committee last month – but this was not voted through on the basis there was not enough time to consider it, and the council was about to embark on a review of the events strategy in any case.

Other issues raised in the amendment included the cumulative damage to green spaces such as Hove Lawns from a series of events, the impact on the area surrounding the event space itself including road and cycle lane closures, the possibility of ringfencing events money to be spent on the open spaces they’re held in, and requiring events to abide by the same sustainable initiatives, such as the living wage and a possible ban on single use plastic, as the city council itself does.

A council spokeswoman said: “There is scope to vary charges for events within the current fees and charges framework which enables officers to negotiate the best value for the council while at the same time support community organisations to have a share of event space.

“The approach ensures local communities have the opportunity to stage events and allows the council to negotiate the best deal for residents and visitors with big commercial organisers.

“Fees can vary from no fee for small wholly community use of space to thousands of pounds for large commercial events. We have not found any event bookings made by a commercial organisation through a charity arm in order to secure reduced fees.

“The rates for events are commercially sensitive and therefore we would not comment on any specific event. The framework of events fees and charges is agreed by the tourism and development committee and we will be reviewing this as part of a future events strategy as well as continuing to brief committee members on the rationale for commercial negotiations.”