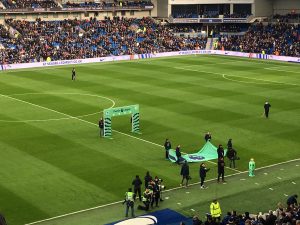 Albion were all over Burnley like a cheap suit for large parts of game but were let down by the quality of play in the final third.

With Bruno recalled and Pascal Gross looking like he was back to his attacking best, the Seagulls gave the Burnley defence a torrid time in the first half.

Then the focal point of the half, if not the entire match, another soft penalty as James Tarkowski and Murray tussled in the penalty area, referee Chris Kavanagh pointed to the spot.

It all appeared a bit hurried as Murray lofted the ball well over the bar. Although some fancied he slipped as he was about to strike the ball. 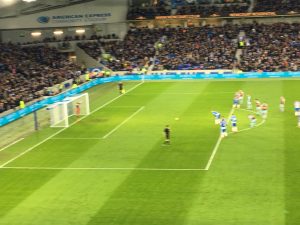 Just before half time Gaetan Bong picked up a loose ball, his scuffed shot fell to Shane Duffy who effort from 12 yards was well saved by Pope

Early in the second half the commanding Dunk released Knockaert, his deflected shot just eluded a stretching Murray at the far post.

Albion were beginning to lose their foothold on the match, former Albion loaner Chris Wood went clean through but Ryan made a superb block. Then another former Albion striker in Ashley Barnes came on for Wood, within minutes Barnes was booked for bundling Ryan and the ball into the net.

Izzy Brown and Jose Izquierdo came on for Albion and tried their best to link up and get Albion going again.

Near the end Duffy made a fantastic block tackle just as Barnes was going to pull the trigger from close range , then the centre half who escaped a driving ban last week, was booked for deliberate handball and will miss the visit of Watford, who Albion take on at the Amex next Saturday (23 December)