Five-storey extension to Brighton property turned down by planners

A planning application to build a five-storey extension at the back of a property in Brighton has been turned down.

The plans included an enlarged basement for the existing property in Preston Road on the corner of Ditchling Rise, with the extension including four flats and a bin store.

Two earlier applications were turned down too but a number of councillors said that they hoped to see more suitable plans for the site in the future.

A report to Brighton and Hove City Council’s Planning Committee recommended refusing permission because the extension would be too bulky and out of keeping with existing building and neighbouring properties.

The report said: “The proposal is therefore significantly harmful to the character and appearance of the host building and street scene.

”(It) would result in a significant loss of light and outlook … The mass and scale of the extension would also result in an overbearing and oppressive impact.

”The proposal would therefore cause significant harm to the amenity of adjoining occupiers.

”The scheme has been revised again (but) the modest revisions … have not addressed all of the previous concerns.”

A majority of members of the Planning Committee agreed, voting seven to four against the plans, with one abstention, at the meeting at Hove Town Hall.

And, he said, the revisions had taken previous criticisms on board.

But Councillor Adrian Morris said: “Our concerns have not been addressed.” 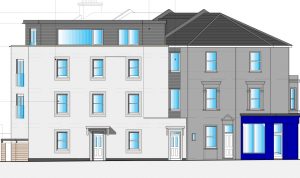 Councillor Leo Littman said that it wasn’t an extension as it dominated the building that was already there.

Councillor Julie Cattell said that an extension should be subservient to the original building.

But her colleague Councillor Emma Daniel called for “common sense” because the extension couldn’t be seen from the front of the original building, which includes a shop at ground floor level.

Councillor Cattell, who chairs the Planning Committee, urged the applicant to “come back to us again” with a further revised scheme.