Fire crews returned this morning to the scene of the blaze at the Hove end of Shoreham Harbour as demolition work started and an investigation continued. 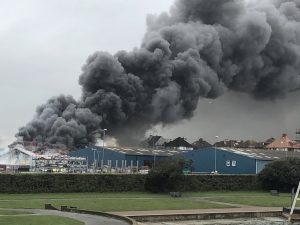 East Sussex Fire and Rescue Service said that firefighters were expected to remain at the scene of yesterday’s fire throughout today (Friday 16 March).

The fire broke out at Chandler Building Supplies, Basin Road North, just before 8.45am yesterday.

The fire service said: “The building has been badly damaged and is due to be dismantled.

“As of 9am, two fire engines remain on scene. This number may increase if needed.

“There may also be further smoke coming from the site.

“Locals are being advised to avoid the area and keep doors and windows closed.

“Some road closures in the immediate area remain in place.

“The fire and rescue service is working alongside Building Control, the Environment Agency, the site owners and demolition crews.”