Deliveroo told to close down its ‘dark kitchen’ in Hove

Deliveroo has been told to close down its ‘dark kitchen’ in Hove because it breaches planning regulations. 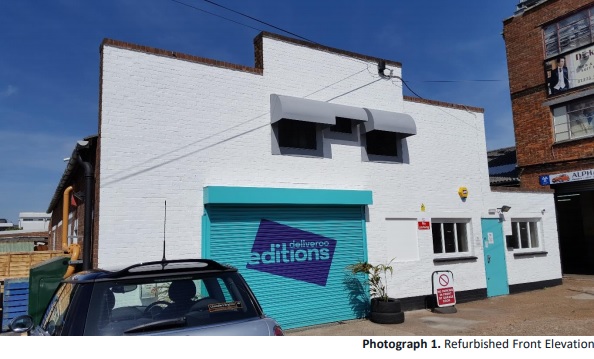 Deliveroo opened its Editions hub at Saxon Works in Olive Road in April last year – one of several around the country which have also been dubbed “dark kitchens” and often operate out of prefabs.

The unit itself is not open to customers and Deliveroo claims it does not fall under the same hot food planning category as a high street takeaway, instead arguing it should be considered industrial use, for which the unit already has planning permission.

But Brighton and Hove City Council’s planning department this month served it with an enforcement notice, requiring it to cease operation as food preparation and delivery – and remove the vents and other additions which have been put on the outside of the unit.

A council spokeswoman said: “Deliveroo believed they could operate the premises under a B1 use class, but after research and consideration we made the judgement that this use class isn’t suitable for the activities being undertaken.

“The enforcement notice requires the cease of a food preparation and delivery (Sui Generis) use. The Local Planning Authority considers that the use is causing harm to the amenity of occupiers of nearby residential properties.”

However, Deliveroo maintained they do have the correct permissions. A spokesman said: “Deliveroo Editions is an exciting innovation in the food industry that people love because it allows them to order great new food to their door. These new purpose built kitchens – that are just for delivery – are an excellent way for restaurant brands to grow in new areas without needing to open a whole new restaurant.

“As with many new innovations, we understand that some people may have questions about how it works. We have repeatedly been advised that the site in Hove has the right permission for Editions to operate, supported by decisions made by other councils where Editions have opened in their boroughs. We continue to want to work with the council to address any concerns they or residents may have.”

Concerns have been raised about the operation of the unit by Green councillors Phelim Mac Cafferty and Lizzie Deane, who have previously spoken out about the impact of Deliveroo delivery drivers on the city.

Cllr Mac Cafferty said: “Deliveroo has stated that Editions is based on community engagement – but we have no assurances over issues like road safety, air quality, noise from increased delivery vehicles and new kitchens, or how these will be monitored.

“Furthermore, I’m concerned that local restaurants may find themselves forced out by this uncompromising business model. This will see Deliveroo front the costs of setting up delivery only takeaway kitchens while our smaller, independent sit down restaurants will hardly be able to compete.”

Councillor Lizzie Deane added: “This is yet another symptom of the burgeoning ‘gig economy’ phenomenon which rides roughshod over workers’ rights and local communities.

“Even though the company claims that the kitchens will be away from residential areas, my concern is that noise blight from delivery bikes will affect the whole city. I already receive many complaints from residents about this, and I fear these plans could make matters worse.”

One neighbour has made an official objection to the hub. Ayman Ibrahim of Olive Road said: “Since this business has opened the noise in our home has dramatically increased from several areas, be it from door slamming late into the night to the loud noise from some of the motorbikes used by staff.

“Further to this there has been a blatant disregard from staff when spoken to about noise levels on several occasions. This has been our family home for over 16 years now, and was a very peaceful environment until recently.”

The notice was served on 1 March and delivered to Deliveroo on 5 March. It takes effect on 5 April and must be complied with by 5 July. However, Deliveroo does have the option of appealing, which would effectively put the notice on ice until a planning inspector rules on it, which would probably take several months. The spokesman said the company was considering its options.

In its planning application for the installation of external ductwork and ventilation, which was submitted retrospectively in August last year, Deliveroo’s planning consultants Firstplan said: “Deliveroo has occupied this unit for approximately four months and it has been a popular addition in the local area, breathing a new lease of life into this building and creating a large number of jobs for the local economy.

“The unit is operated under the company’s Deliveroo Editions concept which are hubs that host a collection of hand-picked restaurants, all specially designed for food delivery. There will be no public access to the unit.

“Prior to occupation by Deliveroo the site was in use as a Class B8 warehouse (occupied by electrical supplier QVS) for storage and distribution purposes for well over 10 years.

It adds: “It is important to note that the operation does not provide any facility for customers to pick up their food directly and the operation is entirely restricted to the interior of the building.

“The concept relates only to the preparation and dispatch of food as a commercial operation. For these reasons, the unit is solely used as a commercial kitchen which falls within the classification of a B1c use class as defined by the Town and Country Planning (Use Classes) Order 1987 (as amended).

“Indeed, this is typically taken to comprise: ‘any industrial process being a use which can be carried out in any residential area without detriment to the amenity of that area by reason of noise, vibration, smell, fumes, smoke, soot, ash, dust or grit’.

“The Deliveroo Editions concept is entirely consistent with the B1c classification. Indeed, this classification has been found acceptable by Local Planning Authorities across England and is well established.”

This application for the ductwork and ventilation remains undetermined, on the basis that the application relates to a use which doesn’t have planning permission. The enforcement notice also requires their removal.