London based Laish returns back home to Brighton 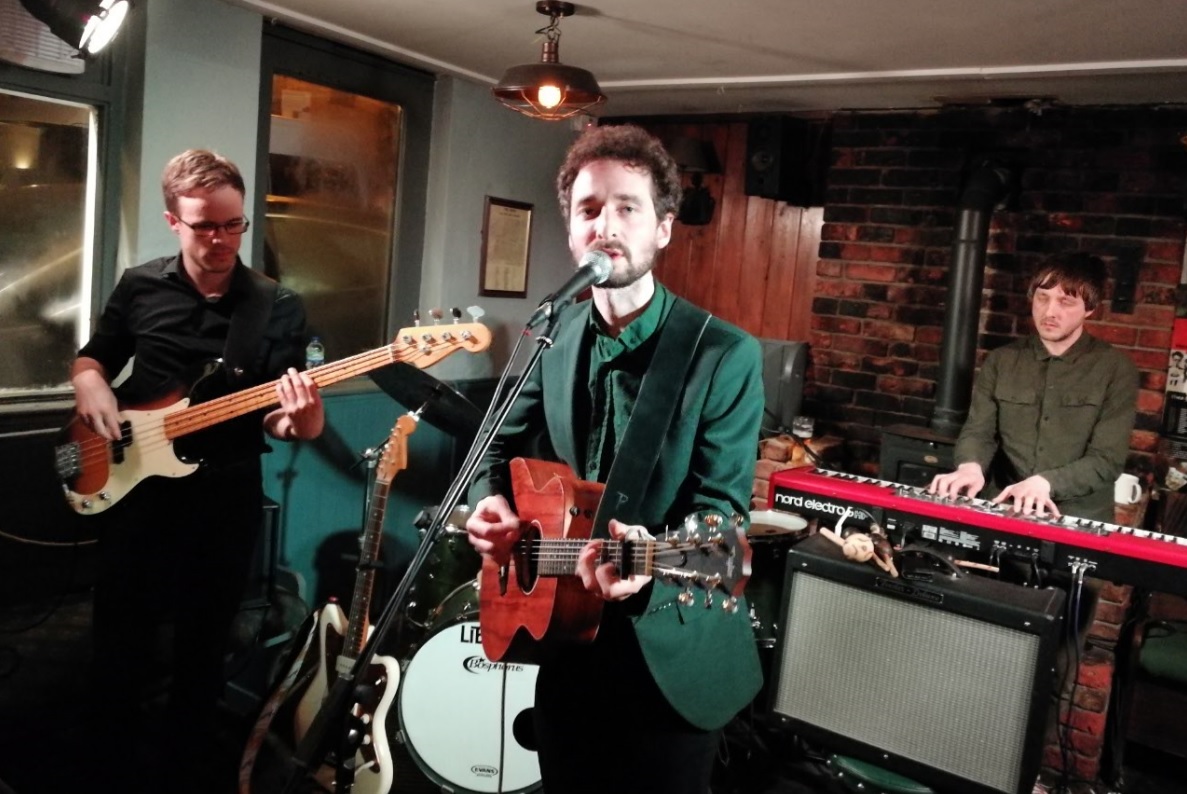 Back in 2008 the alternative folk band Laish (pronounce Lie-sh) were formed in Brighton and ten years down the road the collective are still on the case. They are piloted by the thoroughly engaging and charismatic frontman Danny Green. His glorious voice ranges from the angelic, to a plaintiveness echoing Robert Wyatt, to deeper Kurt Wagner-esque tones.

Laish have often been praised by the media. Here is a selection for you, so that you get a feel for their music: 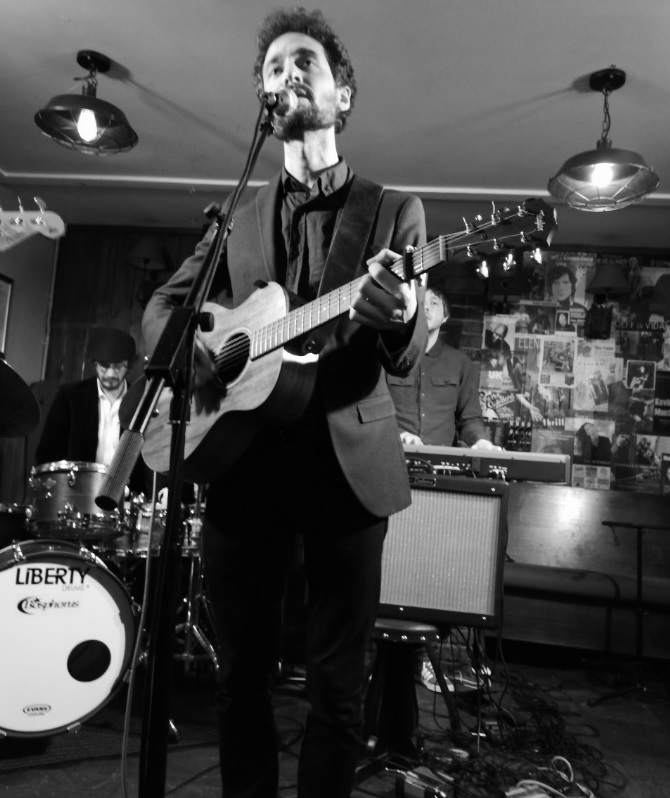 On 13th April they “unLaished” their brand new ten track album, ‘Time Elastic’, which was made in Brighton late summer last year with producer Tim Bidwell. The new platter is available in guess what colour vinyl? Yep..(Danny) Green and rather striking it is too.

It brims with ultra-cool, classic songwriting and is a superbly developed and playful record which is full of surprises. Clearly this is a bold step forward, presenting a songwriter at the height of his powers. Compared to its predecessor ‘Pendulum Swing’, essentially a heartbroken record, ‘Time Elastic’ is more reﬂective and appreciative, a taking stock and consolidation. 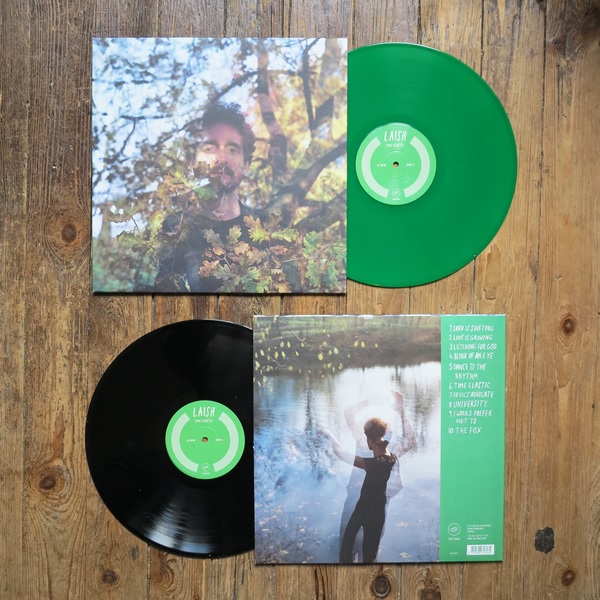 The new Laish album in Green or Black vinyl

The new album, which you can purchase HERE is being promoted by the gang with an April album launch tour and tonight the guys rolled up at the door of The Greys in the heart of muesli mountain in Brighton.

Fuelled by traditional Brighton fish and chips for tea, the Laish contingent were fully up and running for their enjoyable 16 song set. Frontman Danny (who was mainly sporting green) is such a likeable and intellectual fellow that the Hanover community (the area where The Greys pub is located) took him to their hearts and hung on every word he said. 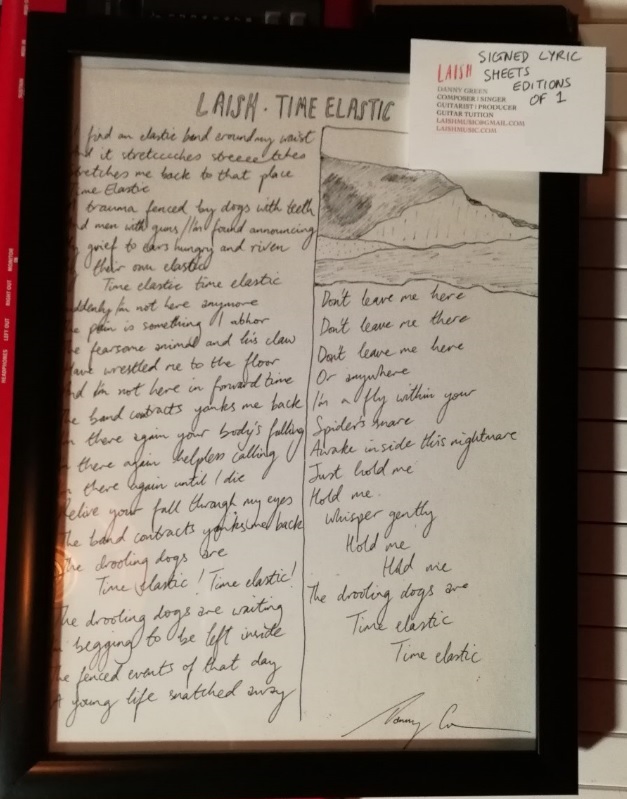 One of a kind – framed lyrics for ‘Time Elastic’

We learnt that the new album and in particular the title track ‘Time Elastic’ came about as a result of the sadness felt by Green on hearing of the terrible accident that happened in 2015 at Ovingdean regarding the passing of Nick Cave’s son Arthur. Danny is obviously a kind and sensitive soul and something like this tragedy happening to a fellow musician could not fail in triggering his empathy and sorrow.

During The Greys concert, Danny performed two of the sixteen songs as totally acoustic, even without the assistance of a microphone. Those songs being ‘Wrote Of Freedom’ culled from 2016 ‘Pendulum Swing’ album and ‘Friend In The City’. 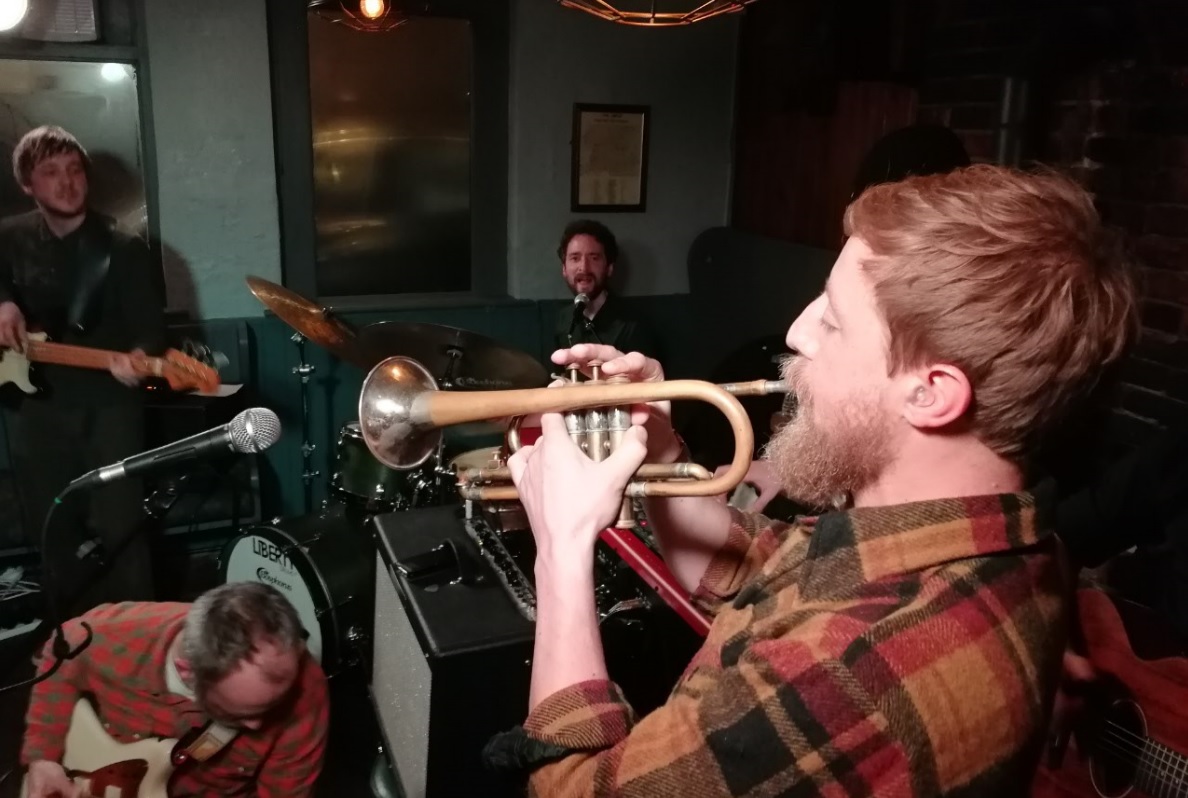 Laish live at They Greys, Brighton 16.4.18 with Danny on drums

The highlights were for me personally ‘Learning To Love The Bomb’, ‘Dance To The Rhythm’ and obviously ‘Time Elastic’.

The line-up fluctuated slightly during the evening, but for the final song everybody swapped around instruments, which was a unique and fun way to end the relaxing evening’s entertainment.

A great night out in a pleasant local community public house.

If you wish to find out more about Laish and the new album, then click here: https://laishmusic.com/ 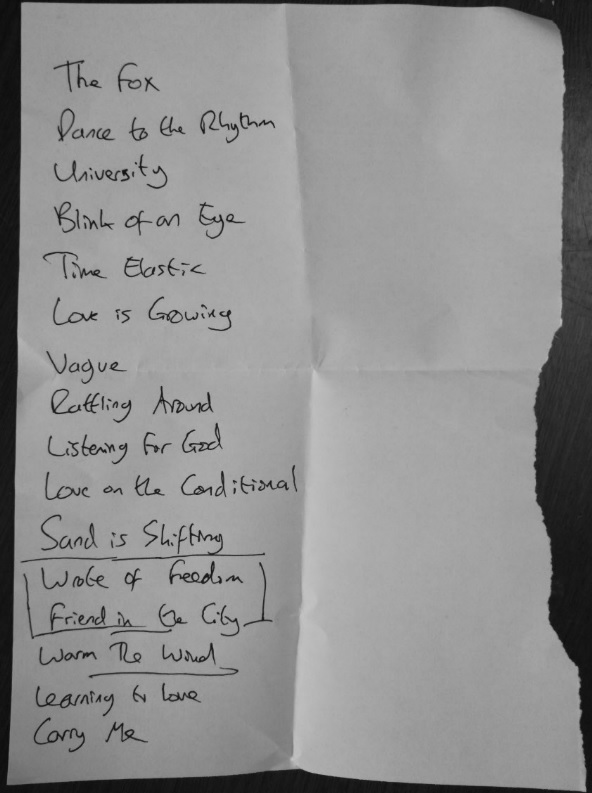 Laish setlist from The Greys gig 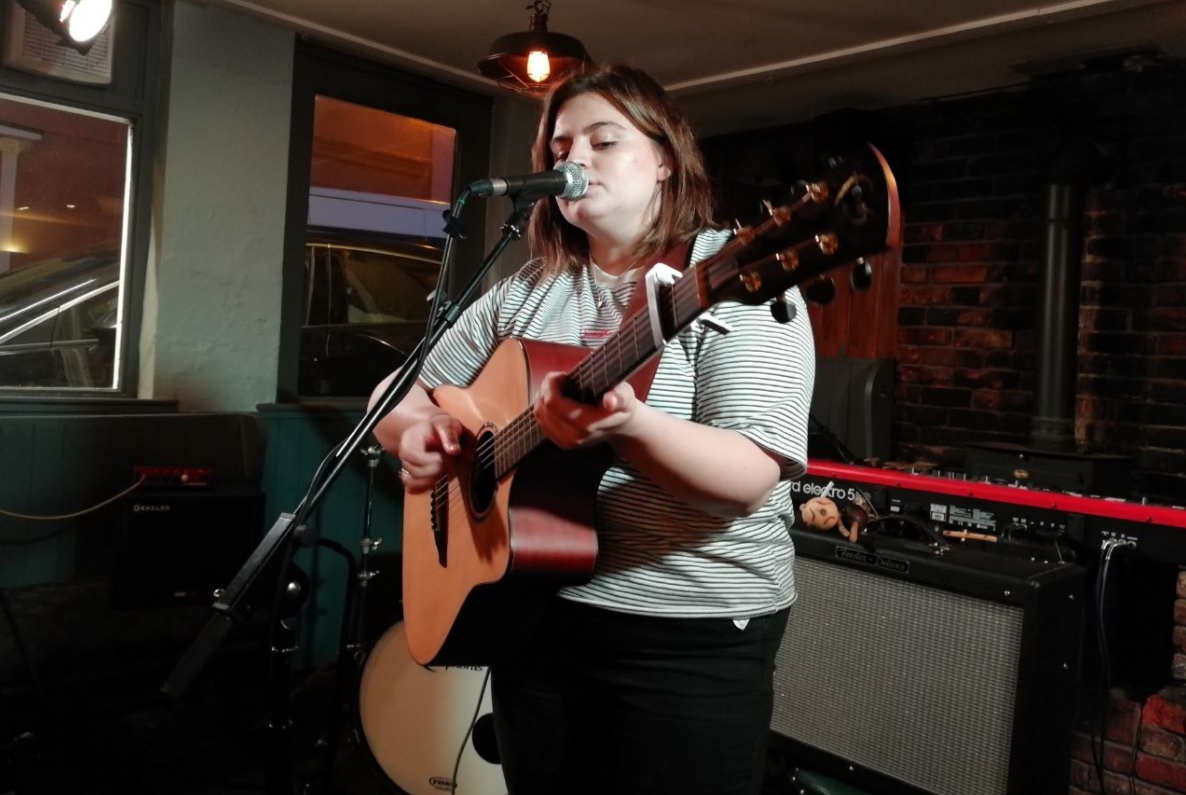 Support this evening came from the charming indie ambient folk singer Amelia Caesar, who had kindly hot-footed it down from London to perform tonight for us. It was simply one lady, one voice and one guitar.

Amelia has recently released her debut EP ‘Weep Like Giants’, which she performed tracks from this evening. You can locate it on Spotify and there is another song located HERE and her Facebook page is HERE. 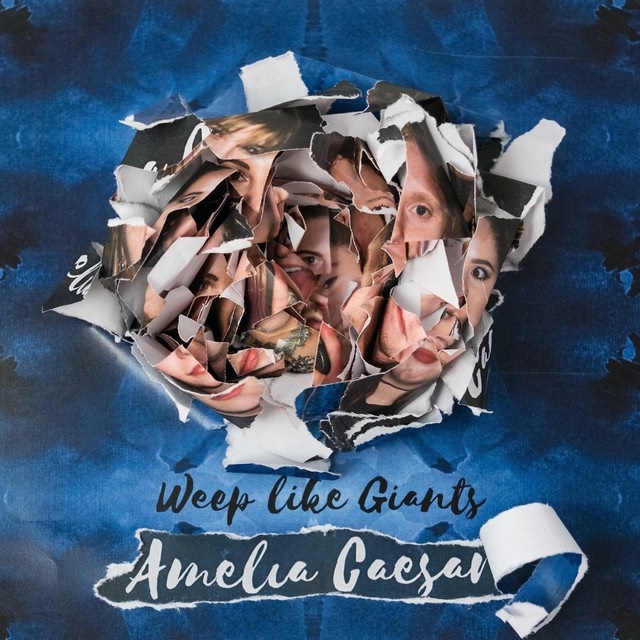 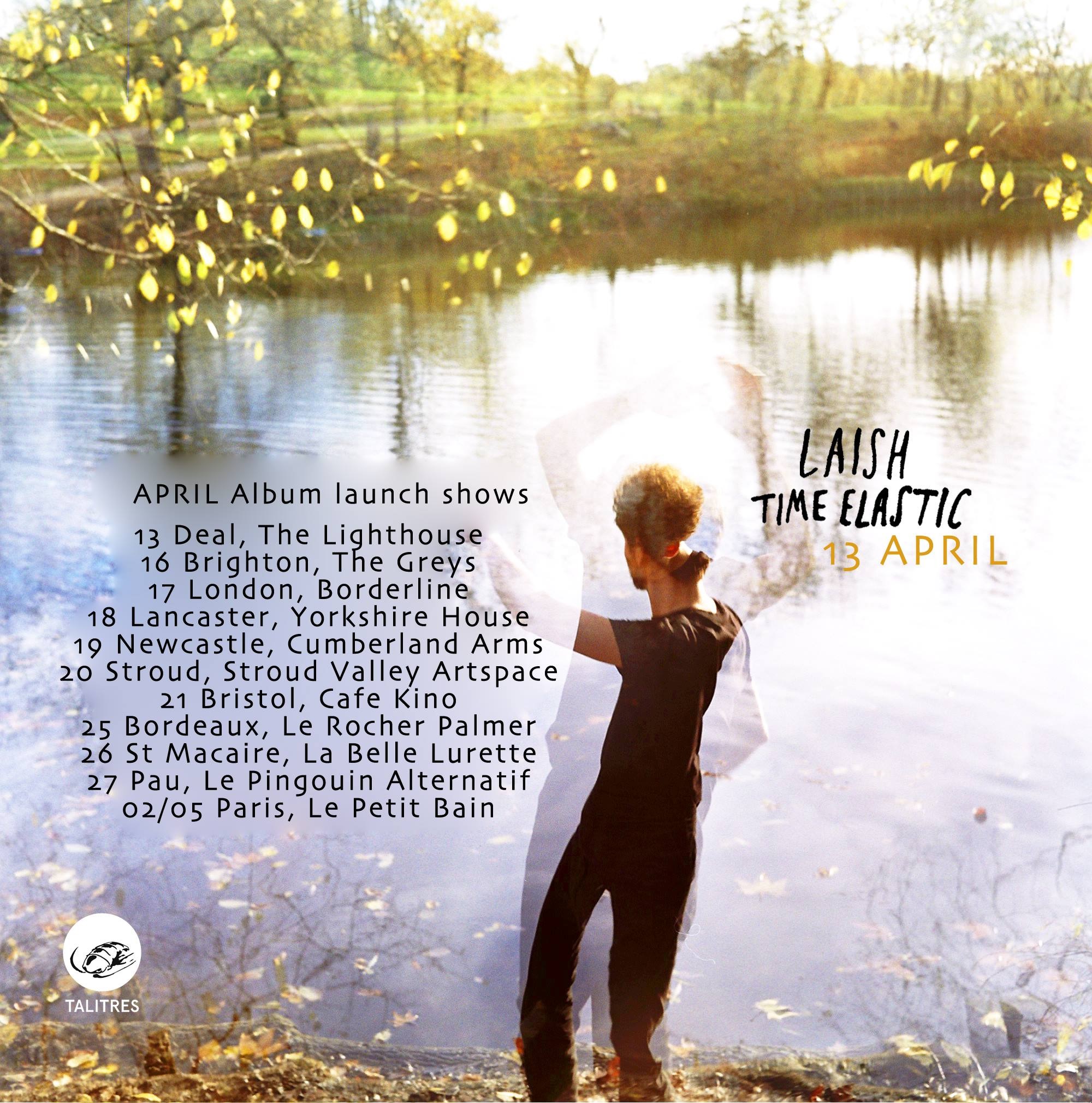