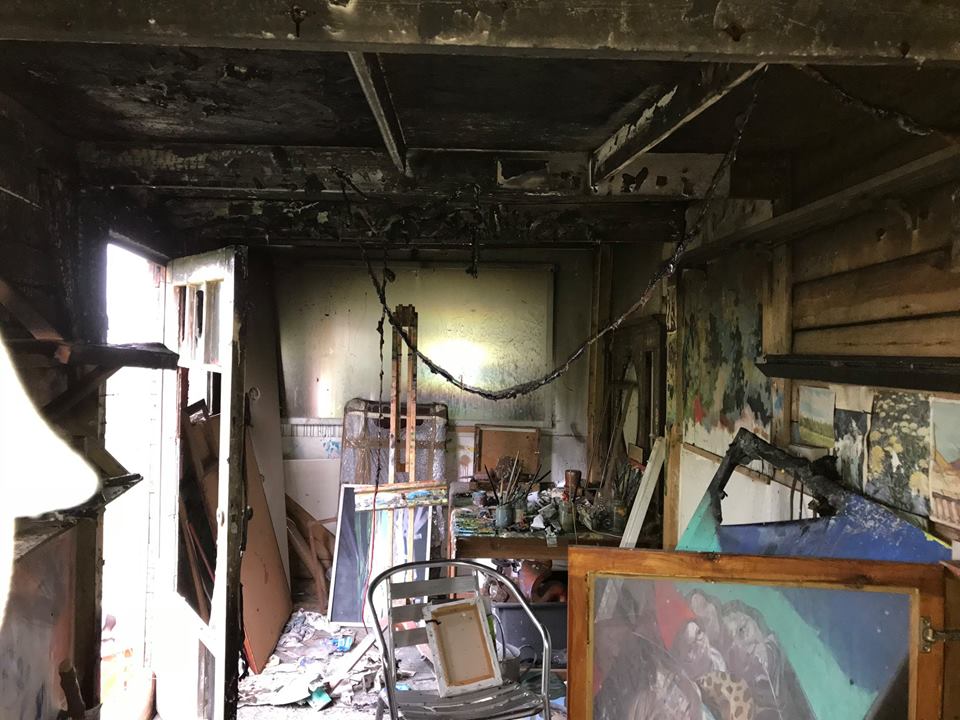 A painter has lost hundreds of pounds worth of art after his home-made wooden studio went up in flames – but thanks to his 14-year-old son, he was able to stop it spreading further.

Landscape painter Grant Dejonge, who now lives in Plumpton but once lived in Hove and had a gallery in the Brighton seafront arches, was alerted by son Alex who called him after seeing the studio door burst open with smoke and flames billowing out.

Grant ran to the scene, dashed inside to retrieve flammable white spirit before it caught alight, then used buckets of water to tackle the flames until the fire service arrived and used a hose reel to put out the blaze.

Now, he is asking for help to get him back on his feet and is aiming to raise £2,000 via a crowdfunder.

Grant said: “Several pressurised aerosol cans had gone off like hand grenades. My big fear was that it would explode and spread the fire to an adjoining storage shed where more art works are kept.

“Like the studio, I’m gutted. There was very little else left to salvage. Several paintings have been destroyed. I’ve lost most of my tools and materials including oil paints, brushes and palette knives but I’m going to try and take a positive from this and rebuild the studio better than ever.”

The fire brigade arrived at the family home at Tenby cottages on the Lewes Road in Plumpton in time to douse the smoking embers of the studio which the artist built himself using recycled timber and driftwood.

A fire investigation officer who attended the scene said the blaze was started by an electrical fault.

There was more bad news for the Dejonges when they discovered the studio was not covered by the house insurance.

Now the street artist turned landscape painter is appealing to the local community in Plumpton to help refurbish the burned out shell which is all that remains of his workplace.

He said: “I’m putting the word out in the village, asking if anyone has got suitable items to help me put the studio shack back together.

“I’m going to need building materials, timber, roofing felt and marine ply, anything which might help repair the damaged areas of the structure.”

A spokeswoman for East Sussex Fire and Rescue said: “At 4.49pm on Thursday, 26 April, crews from Lewes and Burgess Hill were called to a small fire in a shed in the garden of a residential property on Lewes Road, Plumpton. Crews used one hose reel to extinguish the fire.”

Grant Dejonge’s South Downs landscapes can be seen in galleries and heritage centres across the south east of England, including a four metre high mural on a wall opposite the library in Brighton depicting the plight of homeless children, which won first prize in a national competition by artrepublic.