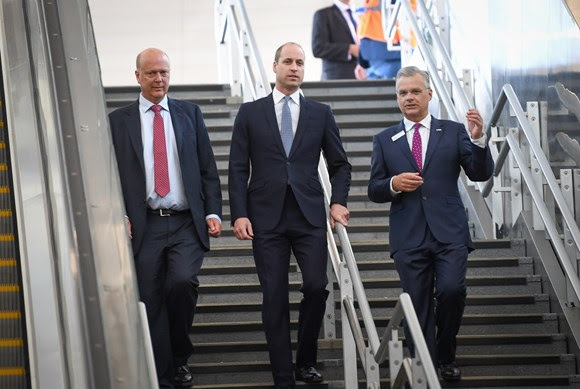 London Bridge station was formally reopened by the Duke of Cambridge this week, heralding what rail bosses say will be faster, more reliable journeys for thousands of Brighton commuters.

The completion of a five-year rail and building programme sees capacity nearly doubled at the station, including two new platforms for the Thameslink Brighton to Bedford service.

New timetables are due to come into effect on Sunday 20 May, with a significant increase in Thameslink trains.

But a knock-on effect is fewer trains to Clapham Junction on the Victoria Line – which will have a significant impact on people travelling from Brighton and Hove to south west London.

One Brighton commuter, Henry Hughes, said he was going to stop commuting altogether as a result. He said: “There used to be two direct peak-time Clapham Junction trains, 6.45am, 8.45am, and returning 5.12pm and 6.37pm. Now the first is at 9.33am, and the first in the pm is 7.30pm. Having to change on the way in means a) you can’t work b) you are much more susceptible to delays.

“I’m a director in a small digital agency in London so can be quite flexible. The ticket costs £4,000 a year and isn’t tax refundable – an office is. Travel to client meetings is also regarded as a tax expense. So I’ve moved into an office in Brighton last Friday and will be handing in my season ticket on May 20.

“I feel really bad for those still having to do the Clapham Junction commute. It’s gone from acceptable to a royal pain in the backside as a result of these timetable changes.”

Another, Holly Cozens, said she was going to face a longer journey for the same money. She said: “There are no direct train to Clapham Junction so I have a longer journey in the morning and more susceptible to delays with having to change.

“I feel exasperated that I already pay 20 per cent of my wages monthly for an annual ticket and now I have to pay the same for worse service.”

At the official reopening of London Bridge on Wednesday the Transport Secretary Chris Grayling said: “Today we are indebted to the thousands of men and women who have built a modern, accessible and iconic station fit for London’s future and the patience of passengers who will now see a transformation in their journeys.

“Thanks to government-sponsored investment, London Bridge station will be the beating heart of the Thameslink, offering thousands of commuters more frequent and reliable services, with modern new trains using pioneering world-first technology to enable better journeys across the entire route.

“It is my honour to welcome the Duke of Cambridge to London Bridge station to officially declare it open.”

Mark Carne, chief executive of Network Rail, said: “This station has been rebuilt from its Victorian foundations upwards by a team of engineers while still providing a service for the 48 million people who use the station every year to deliver it on the very day we said we would five years ago.

“This is a station that represents a transformation in passenger experience, a catalyst for economic growth and a world first in the use of digital railway technology demonstrating our vision of the future.

“I give my thanks to the great people and great teams behind this fantastic project, as well as to our customers for their patience and understanding during these major works.”

In a five-year build, the Thameslink programme, a partnership between the Department for Transport, Network Rail, Govia Thameslink Railway, Southeastern and Siemens, has created the largest street-level station concourse in the UK – big enough to lay the Shard down inside – for passengers to make their connections smoothly and efficiently.

Work has also included a major track upgrade, a new rail underpass on the approach to the station and platform widenings and extensions, all of which means 30 per cent more trains can use the station than before.

The prince then went down from the platform to the new station concourse to meet groups of apprentices, project leaders and staff involved in the redevelopment. They were then given a singing performance by children from the local primary school before unveiling a ceremonial “sleeper” marking the completion of the improved station.

For the first time in over 150 years, passengers at London Bridge – which was built in the 19th century as two separate stations – are able to reach all 15 platforms from one concourse.

The 15 new platforms were completely rebuilt with three more through platforms helping to service the stations on the north side of the Thames and the number of terminating platforms reduced to six.

Two platforms are dedicated to the Thameslink service which allows a significant uplift in services able to stop and pass through the station, carrying more carriages than before and reaching a 138-station network stretching from Bedford to Brighton.

David Brown, chief executive of Go-Ahead Group, the majority owner of Govia Thameslink Railway and Southeastern, said: “The work at London Bridge has enabled the reintroduction of Thameslink services and a much better experience for our customers, who have shown patience throughout the disruption involved.

“In 11 days we’ll be introducing an exciting new expanded Thameslink network – connecting new communities north and south of the capital with quicker journeys across central London and additional capacity.”

“Siemens is very proud of delivering the most advanced UK passenger train fleet on time with the 115 new Desiro City class 700 trains and resignalling the core area to enable the trains to achieve a world first with automatic train operation in combination with the European train control system. This technology is critical to safely achieving a 24 trains per hour passenger service.”

The government is investing in the network which London Bridge is part of through the circa £7 billion Thameslink programme to increase capacity, boost reliability, improve journeys by modernising the existing railway fabric, upgrading stations and introducing new trains and carriages.

London Bridge station is the oldest station in central London and was originally built in 1836. Today it caters for around 48 million passengers a year, making it one of the busiest stations in the country.

Work at London Bridge has included track remodelling and resignalling of all lines east and west of the station involving 128 different track stages and 9 signalling changes and strengthening of 35 bridge structures. Over 25 miles (40km) track and 147 new switches and crossings have been installed.