A Sussex University student has been jailed for eight years for raping a fellow student after a freshers’ week pub crawl. 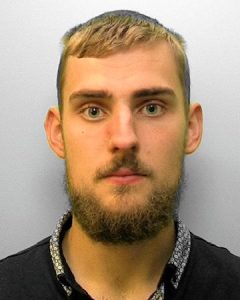 Liam Allen, 22, of Grand Parade, Brighton, was convicted of attacking the 20-year-old after a 10-day trial.

Today (Friday 15 June) at Hove Crown Court, Allen was jailed by Judge Roger Chapple who said that he would be placed on the sex offenders’ register for life.

Detective Constable Aran Boyt, of the Brighton Safeguarding Investigations Unit, said: “Allen had organised the pub crawl round the city during a themed freshers’ week night out for his Sussex University ‘Navy Society’ Royal Navy Unit in October 2016.

“The victim told us she had drunk heavily and woke to find Allen on top of her, having held her down and raped her in her own student flat.

“She tried to sit up and stop him but he just held her down and this young woman was in such a state she was incapable of consenting to sex so Allen took advantage of her state.

“The day after the alleged rape, Allen spoke on the phone to the victim and her boyfriend, saying he was lonely and she was a good-looking girl.

“He said he was sick and twisted for sleeping with her but alleged that she was able to consent.

“He clearly thought about his options after the event because when we searched his mobile phone we found search terms including ‘accused of rape’, ‘minimum sentence for rape’ and ‘CPS guidelines for rape’.

“This was a complex investigation but we were careful throughout to ensure that every possible aspect was explored so that the court was able to consider the full picture in arriving at a verdict.

“The victim was traumatised by this experience and has left her university course.

“We have worked to help her and give her access to further sources of counselling, which everyone reporting such an offence is entitled to, no matter what the circumstances.”