Almost 600 people have signed a petition complaining about refuse and recycling collections being missed in Brighton and Hove.

Patcham resident Arron Rickson, who set up the petition on the Brighton and Hove City Council website, said: “I have had enough. If I didn’t do anything about it then I cannot complain.

“It has felt like no one really cared. I just had enough and raised the petition.”

The petition went live on Friday 8 June and had 579 signatures by this evening (Tuesday 19 June).

Mr Rickson, who lives in Glenfalls Avenue, Brighton, said that he had suffered regular problems with missed refuse and recycling.

He said: “Our bin ended up with maggots. In Hollingbury it’s horrendous.”

“They changed days without sending information,” he said.

“Then we didn’t get a collection … It seems to have become acceptable that we’re missed for another week.”

Tina Norkett, of Regency Court, in Withdean Rise, said that residents did not have rubbish collected for weeks.

She said: “Regency Court started once again not receiving our collection for weeks.

“As flat residents we are definitely treated differently to house owners. My view on this is we pay more council tax than a house-owner per square foot.

“Last week, Tuesday 8 June, our recycling wasn’t collected, along with all of London Road blocks of flats.

“The fob-off from Cityclean was that a vehicle had broken down and I was told we would receive a collection the very next day but no collection has been made.” 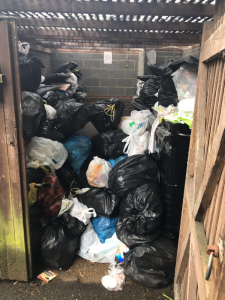 Patcham Conservative councillor Lee Wares has received daily calls from residents in his area complaining about refuse, recycling and garden waste, since the start of the year.

He said: “It is of little surprise that residents, having endured months of failing refuse, recycling and garden waste collections, have started a petition.

“The Labour administration keep saying they are getting the basics right. This is the public making it loud and clear they are not. The workforce do a great job and it must be demoralising that the leadership to help them is absent.”

“In Patcham and Hollingbury emails, phone calls and social media complaints have been relentless.

“As ward councillors we have to invest huge amounts of time trying to get collections done or streets cleaned of litter and that just shouldn’t be necessary.

“All this does is add to the sense that the city is becoming more and more tatty.”

He said that he was also frustrated by the lack of clean up after rubbish was collected from flats in his ward, as litter had been left in the road around the communal bins.

Labour councillor Gill Mitchell, who chairs the council’s Environment, Transport and Sustainability Committee, said that she was sorry about the problems.

Councillor Mitchell said: “In some areas over the past two months the refuse and recycling collections have not been operating as they should and I apologise to the residents in those areas.

“We have put in several measures to support these services at the front line, enhanced managerial support and new vehicles. Some rounds have been restructured and further improvements are planned.

“The council has launched two new major services within the last two years, commercial and garden waste, that both generate income in the face of severe and ongoing government cuts.

“But the new services must not detract from the regular bin collections and these are what we are determined to improve.”