A burglar from Brighton is being hunted by police for recall to prison. 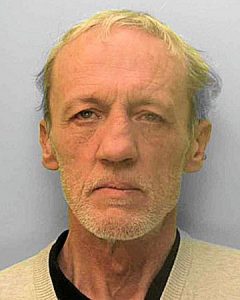 “John Cain is wanted on recall to prison after failing to stick to the terms of his release for an offence of burglary.

“The 56-year-old is known in the Kemp Town and Sutherland Road area and it is believed he might be staying in a tent.

“Anyone who has seen him or knows where he might be is asked to contact police online, quoting serial 1202 of 13/06.”