Did you see the man who punched and headbutted someone in a Brighton street?

A man punched and headbutted another man in a Brighton street after stepping into an argument. 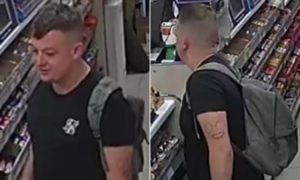 Sussex Police said: “Police have released a CCTV image of this man they would like to trace in connection with an assault in Brighton.

“The victim was having a disagreement with his girlfriend in Whitehawk Road at about 11.45pm on Friday 1 June.

“They were approached by another man, who tried to intervene but who then punched the 42-year-old victim before going on to headbutt him and hit him in the face with a bottle while he was on the ground.

“He suffered a broken jaw and a head injury.

“The victim was taken to hospital for treatment.

“The suspect is described as white, with thick black hair shaven around the sides and back and has a black tattoo on the top of one arm.

“He was wearing a black t-shirt with a white motif and carrying a grey rucksack.”

Detective Constable Duncan Lloyd said: “This was a violent attack and we are keen to talk to the man in the CCTV image in connection with the incident.

“If anyone recognises him or has any information about him or what happened, please get in touch with us.”