Who would live in a home like this? Derelict barn in Hollingbury woods up for sale 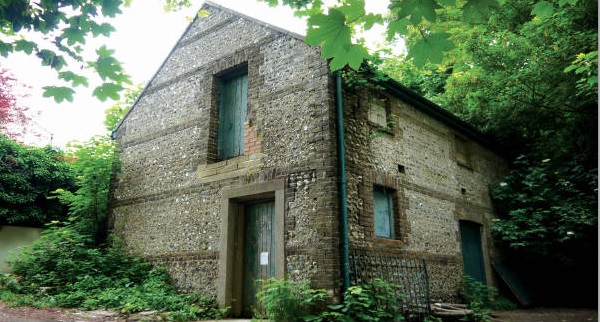 It’s been a stable, a storeroom, changing rooms – but now this flint barn could become a home for anyone prepared to do a lot of work on it.

Hollingbury Barn in Hollingbury Park is being put up for sale by Brighton and Hove City Council to help pay for a new home for the City Parks depot once the Stanmer Park restoration gets under way.

It’s being auctioned with a guide price of £100,000 later this month – but although it now has planning permission to be converted into a home, it’s in such disrepair that the new owners could face a hefty bill to make it habitable.

And part of its grounds include the cess pit for the nearby cottages – with the sewage truck emptying it from hardstanding in the barn’s garden.

The barn had been used as a store by the Friends of Hollingbury and Burstead Woods for the past 30 years, before they moved out last month.

In a comment on the recent planning application, Friends chairman Peter Jarman, who argued that the barn should be kept as storage, said: “The barn was originally the stable for the Parks Manager’s horse and cart and as such has few amenities.

“The upstairs section was used as a changing room for football teams when the park had pitches. Access was afforded by external steps which were removed in the 1990s when they became unsafe. We are also informed that the flooring of the upper section is unsafe.”

He went on to say the roof leaks, there is no toilet and putting in mains sewerage would not be possible, that there’s only enough electric wiring for lights, and that there’s been no water supply to the wash basins which means the pipes could have deteriorated.

He added: “We feel that the barn has nothing to offer to any purchaser and in this respect all previous efforts to sell the barn were unsuccessful as potential buyers withdrew after viewing the building.”

Several people who commented said that bats roosted in the barn too, which could also hold up any development.

A council survey estimated the cost of repairing the barn at just over £5,000 – but this only included replacing the roof and external doors and windows.

Planning permission was given – but with a slightly daunting condition that all work should cease if anything dodgy was found – with oily soil, asbestos, sandbags or animal carcasses given as examples.

Any ambitious developers who are still interested at this point can view the listing here. The auction takes place at the InterContinental London Park Lane in Mayfair at 10am on Thursday 19 July.