After weeks of speculation the Seagulls have signed Alireza Jahanbakhsh from the top-flight Dutch side AZ Alkmaar for what is thought to be a club record fee of £17 million. 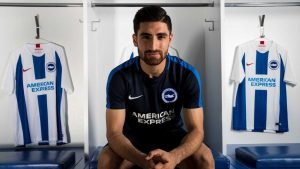 The 24-year-old Iranian international has signed a five-year contract with Brighton and Hove Albion until June 2023 and becomes the eighth major signing of the summer transfer window.

The club said that he had joined on undisclosed terms.

Albion manager Chris Hughton said: “We are delighted to welcome Alireza to the club and we are particularly pleased to get this deal over the line.

“Ali is a player that we have been aware of and monitored for a few years and his versatility will increase our attacking options within the squad.

“He can play in a wide position or central midfield attacking role and I am now very much looking forward to working with him.”

Jahanbakhsh started his career with the Damash Gilan youth academy, before moving to the Iranian second division side Damash Tehran in 2010.

He returned to Gilan a year later and became one of the club’s youngest-ever players, making his senior debut in 2011 at the age of 17.

The midfielder moved to the Netherlands and signed for NEC Nijmegen in 2013 where he made 64 appearances and scored 19 goals.

He was part of the side that won the Dutch second tier title – the Eerste Divisie or first division – in his second and final season at the club.

A move to Alkmaar followed in 2015 – and the Iranian was the top scorer in last season’s Dutch Eredivisie, scoring 21 goals in 33 appearances.

He has 41 caps for Iran and played last month in all three of his country’s games at the World Cup finals in Russia.