Sitting Labour councillor Peter Atkinson survived a heated selection meeting this evening – after the air conditioning failed and the mercury edged towards 40C. 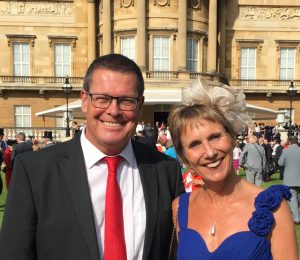 Peter Atkinson with his wife Melanie

For once the hot air couldn’t be blamed on the politicians in the room as everyone present sweltered.

Councillor Atkinson was picked to stand in North Portslade again next May when he will be joined on the ballot paper by former Wish ward councillor Anne Pissaridou.

She will stand in place of Councillor Penny Gilbey, the deputy chair of Brighton and Hove City Council Planning Committee.

She will retire at the local elections in just over nine months’ time after eight years as a councillor and was thanked for her service.

James Ellis, who hoped to win the selection in place of Councillor Atkinson, was unable to make it to the meeting. He went to a funeral in Yorkshire, party members were told.

Any hopes of using Skype might be considered to have cast doubt on Brighton and Hove’s claim to be a digital city.

But his speech was read out on his behalf by Councillor Daniel Yates, the Labour leader of the council.

The meeting took place at the City Coast Centre, in North Street, Portslade, a day after Labour shadow cabinet member Sir Keir Starmer spoke to the party faithful there.

Councillor Yates said: “Just come out of the most heated selection meeting ever in North Portslade. Air con not working. Room about 40C. And Skype failure. But very well mannered.”

Just come out of the most heated selection meeting ever in north Portslade. Air con not working. Room about 40c. And Skype failiure. But very well mannered 1/2 @Journo_JoelA

But the good news is that Peter Atkinson will again be one of our candidates and that @paulinemable will once again be standing. Thanks was paid to penny Gilbey for her long service.