Next weekend marks one of the biggest in the city’s calendar as we come together to celebrate our LGBT community for Pride.

As we did for Trans Pride on Saturday 21 July, Greens will once again march with all those who stand together for equality and liberation.

This year is also the 40th anniversary of the iconic rainbow flag. Designed by artist Gilbert Baker, the flag was first flown at San Francisco’s Pride march in 1978. Now a celebrated symbol of the LGBT community, it is rooted in activism.

Following the tragic assassination of the first openly gay US politician Harvey Milk, demand for the flags soared.

Today we wear the symbol with pride – but despite progress, we know that our activism must continue, as one in four LGBT people have experienced violent hate crime.

Four in ten British people believe gay sex is unnatural. Homophobia is legitimised in government with the partnership between the Conservative Party and the stridently homophobic Democratic Unionist Party (DUP), who have blocked equal marriage in Northern Ireland. The noisy march for equality goes on beyond Pride weekend.

And this is why: Theresa May’s government’s continued policy of creating a “hostile environment’ for migrants has exacerbated LGBT persecution.

Data published by the UK government last November revealed that thousands of gay, lesbian, bisexual and trans asylum seekers have been refused entry into the UK from countries where they will face prison, violence or even death.

Not a single applicant from India or Sri Lanka, where homosexuality is illegal, was accepted by the Home Office.

Worse still, asylum seekers have described facing intense discrimination in the process of making their claims, including being asked for explicit pictures to ‘prove’ their sexuality.

People whose claims are rejected are then subject to detention centres, places that national charity Stonewall found were “little sanctuary from homophobic, biphobic and transphobic abuse”.

In a country where homosexuality has been “decriminalised’ we are still locking people up for being LGBT. 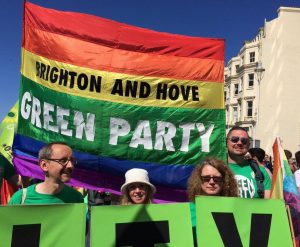 As the city becomes a show of colour and celebration we should take the time to remember that LGBT people at home and abroad still face bigotry and violence. On Saturday we must march for them.

As we celebrate the progress made in the fight for LGBT equality, we are reminded by the rainbow flag in its 40th year that it is the dedication of campaigners and courage of communities, refusing to be silent, that has made progress on LGBT rights possible.

Greens will continue to campaign for an end to the brutal “hostile environment’ policy of this Conservative government that punishes those already vulnerable for who they love. We will campaign until we have lasting equality both here and abroad.

I wish everyone a safe, happy and sustainable Pride.

Councillor Phélim Mac Cafferty is the convenor of the opposition Greens on Brighton and Hove City Council.