A disabled man was mocked and abused on a bus in Brighton, Sussex Police said today (Thursday 16 August). 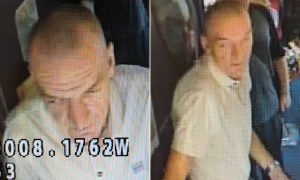 The force also released pictures of the man suspected hurling abuse at the passenger in his wheelchair.

Sussex Police said: “Closed-circuit television images of a man who shouted abuse and mocked a profoundly disabled man aboard a number 5a double-decker bus in Ditchling Road, Brighton, have been released by police seeking to identify the offender.

“At 11.25am on Tuesday 24 July the victim, 52, was in a wheelchair on the lower deck and accompanied by his carer when the suspect launched a venomous verbal attack on him, causing him to cower in fright.

“The man police wish to speak to, pictured, is described as being white, in his forties or fifties and with receding grey hair.

“He was wearing a light-coloured polo shirt.

“Other passengers or anyone else who may have seen or heard the incident, or who recognises the suspect, are asked to contact police online or by phoning 101, quoting serial 799 of 24/07.