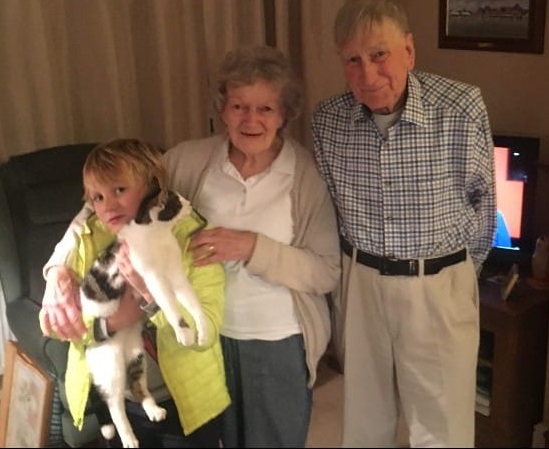 Yolo and Cookie reunited, with Rita and Malcolm who found her in their garage

A Brighton boy was reunited with his missing cat last night after she was found 70 miles away in Southampton.

Yolo Woodman was given Cookie for his seventh birthday almost a year ago, after years of pretending that he had a pet kitten of the same name.

He was devastated when she went missing early last month, and could not be found despite the family hunting high and low.

But 29 days later, Yolo’s mum Sarah had a phone call out of the blue from a vets in Southampton asking her if she owned a cat called Cookie.

A retired couple, Rita and Malcolm, had found Cookie on the roof of their garage and taken her to the vets for her microchip to be read.

Yolo jumped in his dad Craig’s van after school and the pair drove all the way to Southampton to retrieve his beloved pet and bring her back to the family home in Hanover.

Sarah said: “Cookie had been missing for about five days a few months before this, and so this time we thought she would be back the next day, but when she hadn’t got back three days later I started to get proactive, putting it on the Cats of Hanover Facebook group and leafleting.

“Someone told us she’d been in their back garden in Albion Hill walking towards the allotments, and there were also sightings in Pankhurst Avenue and down by the Phoenix Centre – but there’s a Cookie lookalike so it could have been that cat.

“I had still been opening the kitchen window at night just in case she returned but I wasn’t going out and shouting her name as often. But then yesterday afternoon I had a call from a woman who said she was from a vets and do I have a cat called Cookie – and are you in Brighton?

“Craig drove Yolo down after school and Cookie recognised their voices when they were still inside and was excited to see them again.

“She’s quite skinny and she’s got a scratch on her nose but after 29 days . . . She’s very miaowy and she’s doing lots of sitting down and being loved.

“We don’t know how long she’s been in Southampton or how she got there. We presume she was really quite lost and jumped in a car or a van which went to Southampton.

“People have been telling me I should do a podcast retracing her movements.”