Attention punk rock music fans! You won’t believe it, but something very special is going to be happening in January 2019.

You will not only be able to purchase a long lost album from 40 years ago on a choice of coloured vinyls for the very first time, but you will also be able to see the band perform those tracks live for the first time in 40 years!

Now that doesn’t happen every day does it?

1. Background history on the band
The origins of The Pack started with the original band the Pack of Lies. It consisted of Kirk Brandon, John Fuller (who was an old school friend of Brandon’s) and a Scottish drummer called Rab Fae Beith, who incidentally went onto play with the UK Subs. They rehearsed and got the songs together at John’s uncle’s house in Stanmore.

The Pack itself was formed sometime in 1978 in Clapham, South London amongst the punk anarchist scene set amongst the backdrop of the totalitarian government of Margaret Thatcher – at a time when the country stood at the abyss of total chaos.

Looking back at the lyrics to the songs, some would utter that they were arguably simplistic, aggressive, confused, funny and even silly. But back then life consisted at the time of trying to survive on the streets and squats of the south London- the whole period was funny, violent, grim and all at the same time, the band mirrored its surroundings – so no excuses made. 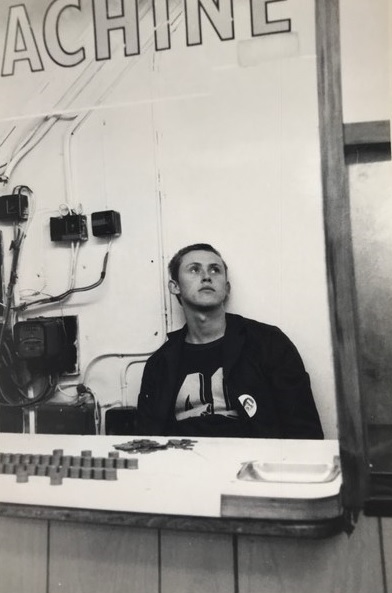 The band’s first gig, now consisting of Kirk Brandon (vocals), Rab Fae Beith (drums) and two Canadian brothers John Werner (bass) and Simon Werner (guitar). The gig was as much a shock to the band as to the startled filmgoers.

They showed Marlon Brando in the ‘Wild One’ before The Pack went on, so they were all juiced up for some kind of riot! What actually happened was about 150 people with thousand yard stares stood stock-still, stunned at the power at the noise of the band – we were seriously angry!

A lot of the shows The Pack played ended up in mini riots and many venues were trashed. One night the band played Deptford, South London at The Crypt, and Brandon recalled to himself “Great everybody’s dancing – but only when we had finished our set everybody was still dancing – in fact they were all trying to kill each other. We left the stage as The Crypt was being deconstructed”.

At that time, all of the band members could be described as a fairly unhinged bunch of people, and what passed for normal, amongst the band and its constant crowd of friends and supporters, did not tie in necessarily with the outside world as a whole. This is a period that only now filmmakers are beginning to see the significance of. With all the violence and drugs and also with one member of the band becoming religious in the end it had to implode sooner or later.

The music industry would not touch The Pack with a barge pole (apart from ‘King Of Kings’ Rough Trade single). For the band it was a lifestyle, the idea of making money out of it was just to far fetched and in their own strange way seemed dishonest, preferring instead penury bolstered by dole cheques.

The last ever gig by The Pack took place at the 101 Club in Clapham. Ironically it was completely sold out by the time the band went on stage, however, by this time success was not an option the band was willing to take.

Along the way they lost a few friends and a lot of idealism but for a lot of them the memory still live on.

2. Where to purchase the album
Wind the clocks forward 40 years to November 2018 and Newcastle Upon Tyne based Overground Records is set to release The Pack’s ‘Dead Ronin’ tracks on Vinyl for the first time ever. There will be 4 very limited edition different coloured vinyls Black, Yellow, Red and Green. Their release date is 25th January 2019. Order your ‘Dead Ronin’ album HERE. 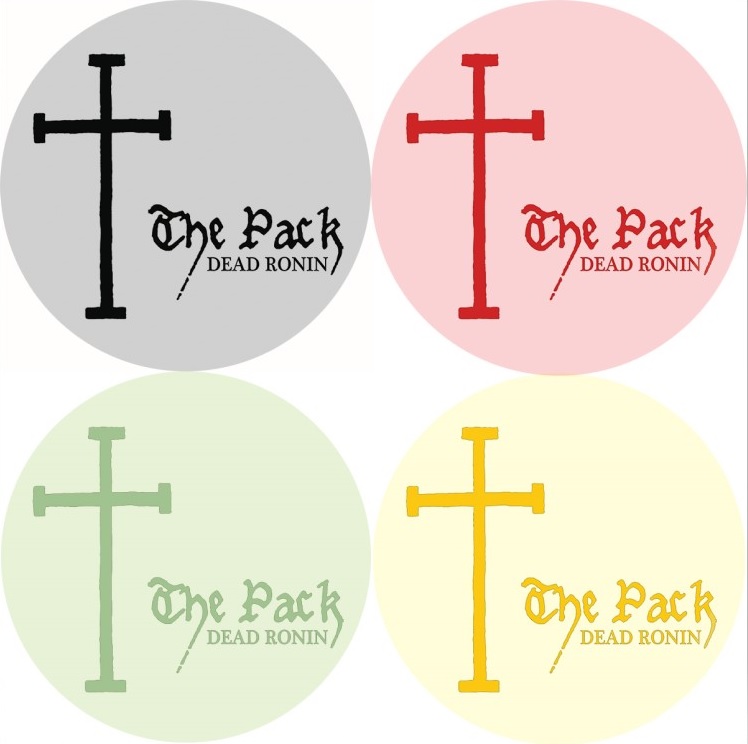 3. Review of the forthcoming album
The Pack’s ‘Dead Ronin’ track by track:

‘Brave New Soldiers’ (04:31) – The longest track on the album, and this tune unmistakably has the template Kirk Brandon wailing vocal style which is found on Theatre Of Hate releases. The lyric writing for one so young is applaudable, with lines such as “Press ganged from the cradle to live as a slave” setting the tone. This was the b-side of their debut single ‘Heathen’ in 1979 and then it became the lead track on their 1980 4 track EP ‘Kirk Brandon & The Pack Of Lies’.

‘King of Kings’ (03:13) – More of a traditional punk sound on this track, with Brandon sounding like Johnny Rotten when he utters “Behold I’m coming quickly and my reward is with me” and also “I am the alpha and the omega, the first and the last, the beginning and the end”. This was their only 7” single release on Rough Trade records, with this tune being the a-side and was backed by ‘No.12’ on the b-side. The track saw the light of day the following year on the SS Records 4 track EP ‘Kirk Brandon & The Pack Of Lies’ and also on the posthumous 1982 EP release ‘Long Live The Past’. A sure fire hit for those who love Theatre Of Hate’s ‘Original Sin’ and ‘Legion’, which leads me nicely to…

‘Legion’ (03:20) – This is more like a Theatre Of Hate early demo, however it sounds business as normal and then at 52 seconds it completely changes as though it’s a different tune and then it comes back on track at 1 minute 45 and at 2:23 it wanders off again, but by 2:41 we are back on track. It’s an interesting listen, but having grown up with the TOH version, that has the edge.

‘Abattoir’ (02:57) – When this one starts it reminds me of the guitar-work on 999’s popular single ‘Emergency’ mixed with the drumming of early Adam & The Ants. This is not a three minute pop song, but it had the feel of a late 1960’s/early 1970’s Bowie composition in there too. This saw the light of day on the 1982 4 song EP release ‘Long Live The Past’.

‘Heathen’ (02:40) – Nice feedback to start with and gnarly shouty lyrics over trad punk sounds. I don’t really understand why it isn’t as well known as it should be as it ticks all of the loud aggression boxes held dearly by the punk fraternity. This was the a-side of The Pack’s debut single out on the SS label in 1979 and it was one of the 4 tracks found on the 1980 ‘Kirk Brandon & The Pack Of Lies’ EP. 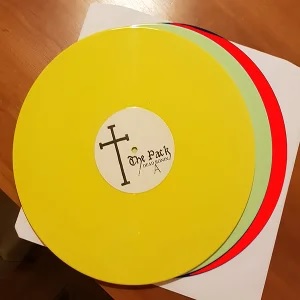 ‘Vauxhall Savage’ (02:30) – 150 seconds of work that could easily be attributed to those lost darlings of punk/goth UK Decay. A most enjoyable listen.

‘No.12’ (02:58) – Now this is probably my favourite track on the album. Once again Brandon sounding like Rotten/Lydon as he bellows out “My name’s Annie..”. It also had the ‘No Reply’ vibe by the Buzzcocks versus a slightly dare I say it metal feeling. For fans of The Sex Pistols. This was the b-side of The Pack’s ‘King Of Kings’ single out on Rough Trade records in November 1979 and it was the fourth track on the ‘Kirk Brandon & The Pack Of Lies’ EP the following year.

‘Machineworld’ (04:15) – Lots of warbling on this one and probably my least favourite song on the whole album. But here is a band clearly refining their future sound.

‘St Teresa’ (01:54) – A faster beat on this one as compared the the previous song and so it’s back to business as normal and it’s under two minutes long, so it should keep those punk purists happy. It’s not often you get you review a song about a prominent Spanish mystic, Roman Catholic saint, Carmelite nun, author, and theologian of contemplative life through mental prayer is it? This was released on The Pack’s posthumous 1982 4 song EP release ‘Long Live The Past’.

‘Thalidomide’ (01:33) – This was the lead track on the bands posthumous 1982 EP release ‘Long Live The Past’, which climbed as high as No.12 in the UK Indie Singles Chart. Rushing in at just 93 seconds long, this is the shortest of the lot and as soon as you get into it, it has gone! And that’s exactly what the album does to you. No soon as you put the needle on the record, it’s time to get up and flip the disc.

You know the best thing to do with this album….put it on all over again! As it truly is a lost gem. It’s the punk album that never was and I thank them for finally releasing it. All there is left to do is to see them perform it live. 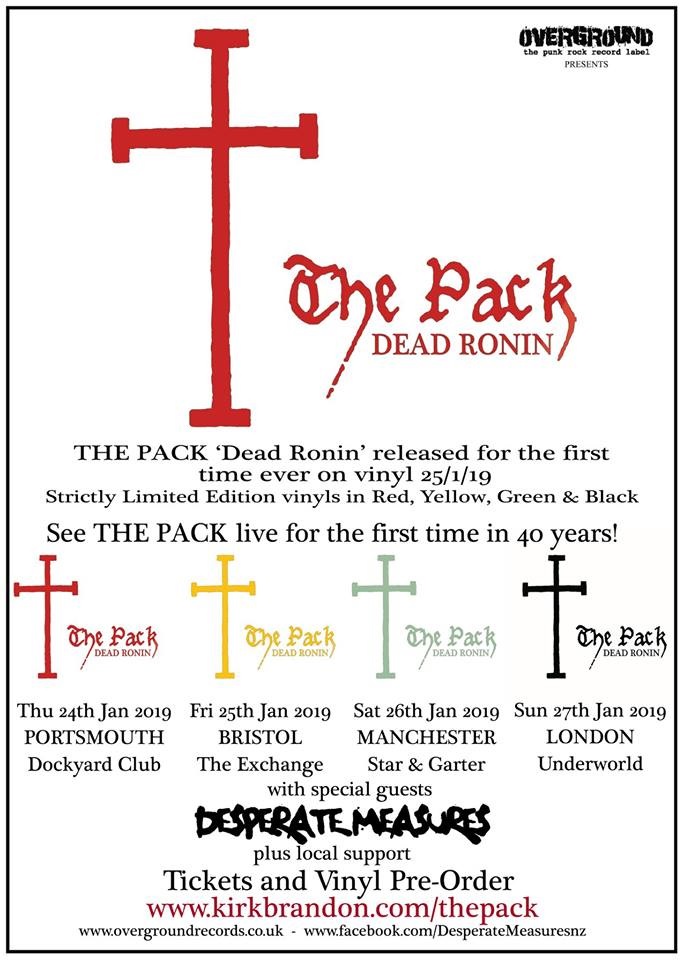 4. Where to purchase your gig tickets
Thankfully, Kirk Brandon has decided to play four concerts of The Pack material and he will be joined by original the Pack bass player John Werner and Warren ‘Woz’ Wilson on guitar as the original guitarist Simon Werner sadly passed away on 26th November 2010. The line up will secured by a very special guest sitting behind the kit (drum roll please) Mr Steve Grantley from Stiff Little Fingers, who was formerly also in The Alarm.

Sadly there is no Brighton concert date, but as this is such a monumental happening, I will be off to the first night to see The Pack perform at the Dockyard Club in Portsmouth on Thursday 24th January. The guys will then perform the following night (Friday 25th January) at The Exchange in Bristol, and then they will go to the Star & Garter in Manchester on Saturday 26th January, followed by the final night at the Underworld in London on Sunday 27th January.

Purchase your tickets to see The Pack live HERE.

A varied and interesting night of music