A man who had been sleeping slapped a woman worker in a pizza restaurant in Brighton. 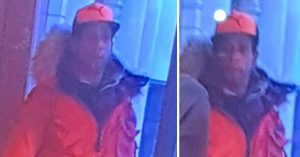 Sussex Police released security camera pictures of the man suspected of slapping the staff member and asked for the publc’s help to identify him.

The force said: “Police are seeking to identify this man in connection with an assault at a restaurant in Brighton.

“About 4.30pm on Thursday 31 January, a woman was working in Casa Della Pizza, in North Street, when she became aware of a man asleep in the premises.

“She went to wake him up, at which point he became aggressive.

“Another staff member intervened and a physical altercation ensued, resulting in the woman being slapped in the face, causing her to fall backwards.

“She sustained minor injuries and declined an ambulance.

“The man was eventually ejected from the premises.