Leaked document is not our manifesto, says Labour leader

A leaked document – described as Labour’s manifesto for the local elections in May – was no such thing, the party leader in Brighton and Hove said yesterday (Friday 22 February). 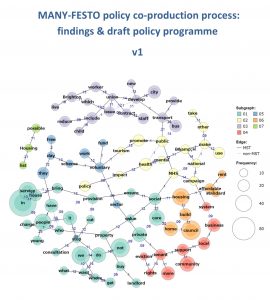 Councillor Daniel Yates said: “It’s a document that brings together the ideas of members across the city.

“The manifesto process, which will be completed by the middle of March, will refine those ideas into a sensible and deliverable manifesto that addresses the problems of the people of Brighton and Hove.”

Councillor Yates – the Labour leader of Brighton and Hove City Council – spoke out after the leaked document, known as the Many-festo, was widely shared.

He said: “We’ve engaged in the most open and transparent manifesto process, inviting thousands of members to take part.”

The document recorded dozens of raw suggestions, he said, and the process of distilling and refining those ideas was currently under way.

He added: “We welcome ideas. The Labour Party is a party of ideas.”

The refining process would take into account the legal and financial constraints and requirements facing Brighton and Hove City Council and its elected members.

Councillor Yates said: “The manifesto itself will be a pragmatic document that we can honour and deliver in full.

“It will contain policies that chime with the values and principles of the Labour Party and the needs of the city.

“The council has to consider the best use of its resources and we wouldn’t want to waste valuable funds on unwinding commitments or legally binding agreements that have already been made unless there were compelling reasons to do so.”

Jon Rogers and Jo Viner, the chair and secretary of the Brighton and Hove Labour Party Local Campaign Forum, said in a joint statement: “The Labour Party in Brighton and Hove, as a democratic mass membership organisation, has engaged with our members in the process of developing a manifesto for May’s local elections.

“This has been a successful and inclusive process, involving members across the length and breadth of the city and from every point of view within the party’s broad church.

“The process is continuing in accordance with the rules of the party.

“It is unfortunate that an individual has apparently shared a draft document produced as part of this process with journalists – and even more unfortunate that journalists have rushed into publication without checking with the Party about the nature of the document, which they have misunderstood.

“The Argus, in particular, appears very confused as they misreport that the draft policy document prepared by Labour’s Local Campaign Forum has been prepared by ‘Momentum’.

“This is simply incorrect as anyone reading the document would see.

“Just as the disgraceful decision of Councillor Meadows to defect to the Tory Party, whose government is ruining our country, has energised Labour activists – so the decision of an individual to ‘leak’ a draft Labour Party document will simply make us redouble our campaigning efforts.

“The process of writing Labour’s manifesto for the future of Brighton and Hove, which we expect to be implemented by a majority administration after May’s elections, is continuing.

“If other political parties want to steal any of the ideas which have been reported on prematurely then they can now do so – but local people will know that all the imagination and initiative in local politics is coming from the mass membership of a rejuvenated, inclusive, democratic Labour Party.”