A man has been arrested after a window was smashed at the office of Hove MP Peter Kyle. 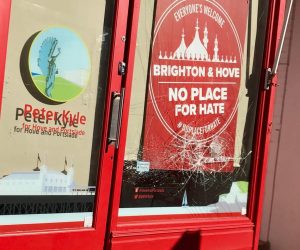 Sussex Police said that the damage to the Labour MP’s office was “not being treated as a targeted or political incident”.

Mr Kyle said that police had previously advised him to fit strengthened glass as a security measure at his office in Church Road, near Hove Town Hall.

Sussex Police said today (Tuesday 26 February): “Police received a report of a physical altercation between a group of people in Church Road, Hove, at around 2.25am on Sunday (24 February).

“During the altercation a window of a premises at the location was smashed.

“The broken window is not being treated as a targeted or political incident.

“A 27-year-old man was arrested on suspicion of criminal damage.

“He was released under investigation and inquiries are ongoing.”