A woman who was moved into a flat that is infested with flies has been told by the council to keep her windows shut.

Laura Fuller was given the advice even though none of her neighbours are plagued by the insects.

He said: “Ms Fuller is in a one-bedroom flat which is suffering from an infestation of fruit flies and gnats.

“This has been an ongoing problem ever since Laura moved into the flat and numerous investigations have failed to find the source of the flies.

“Works staff from the council contractor, Mears, did, however, recently discover a large number of dead flies under the floorboards of the bathroom.

“The council have suggested that Laura ‘keeps her windows closed’ which makes no sense as other residents have their windows open and don’t have the same problem.

Councillor Atkinson said: “Laura suffers from significant mental health problems which have been made a lot worse due to the fly infestation.

“We have gone through all the normal channels, both in terms of council officers and their contractor Mears, but we are getting nowhere.” 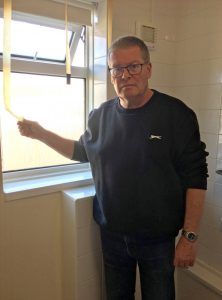 Ms Fuller has been offered temporary accommodation for a week but the fly problem has already taken months to investigate and a more permanent transfer is really the only sensible and practical option.

Councillor Atkinson has contacted the council’s head of housing to ask that Ms Fuller’s case be escalated to the highest possible level within the council.

He said: “Laura deserves better and I am really concerned that her mental health will continue to deteriorate due to this intolerable situation.”