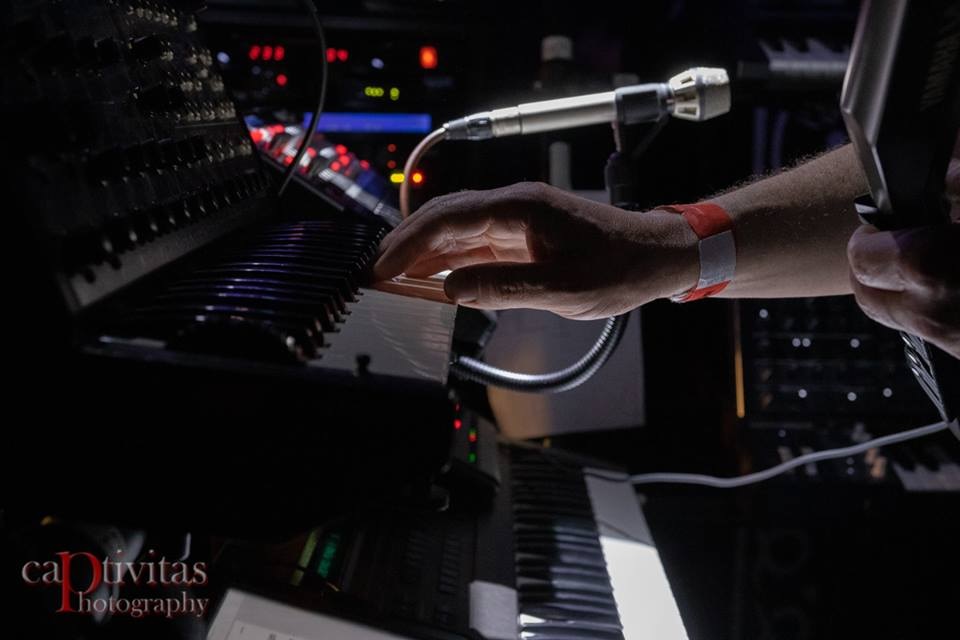 The people of Hastings love a good party and the Fat Tuesday festival is their biggest. Running for five days, it celebrates all things musical, with so many local pubs and venues taking part, it’s a non stop tune filled Mardi Gras.

This year, its tenth, the festival included a two day celebration of electronic music, exploring the wonders of experimental soundscapes and rich, synthesiser filled dance tunes. It culminated in what can only be described as an epic event at the Black Market, deep in the heart of the Old Town. 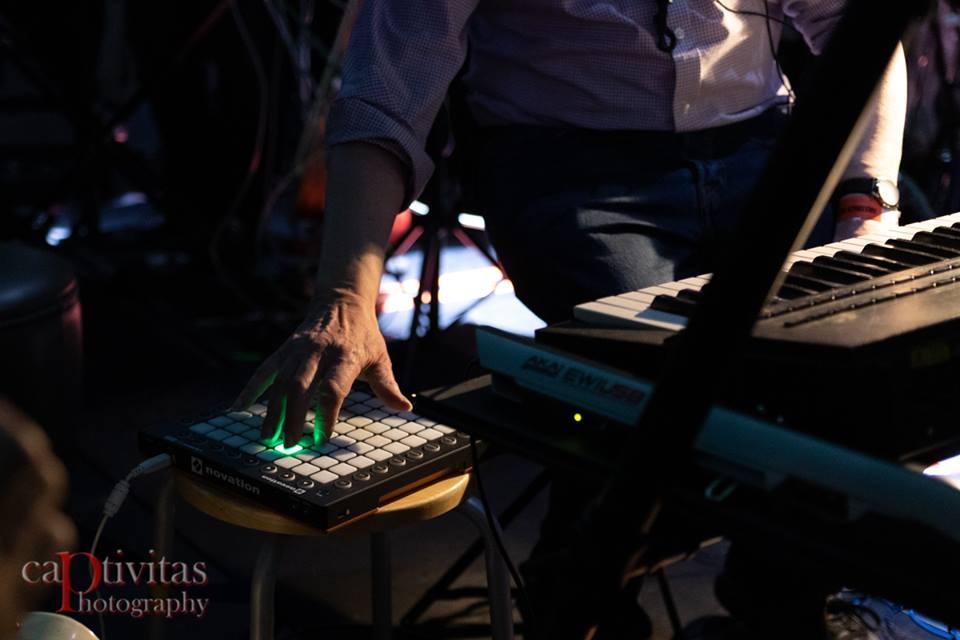 The Radiophonic Workshop are acknowledged pioneers of electronic music. Originally part of the BBC, they were responsible for themes and incidental TV music from the 1950’s onwards and getting them to play the festival was a huge coup and is something I can now cross off my bucket list. 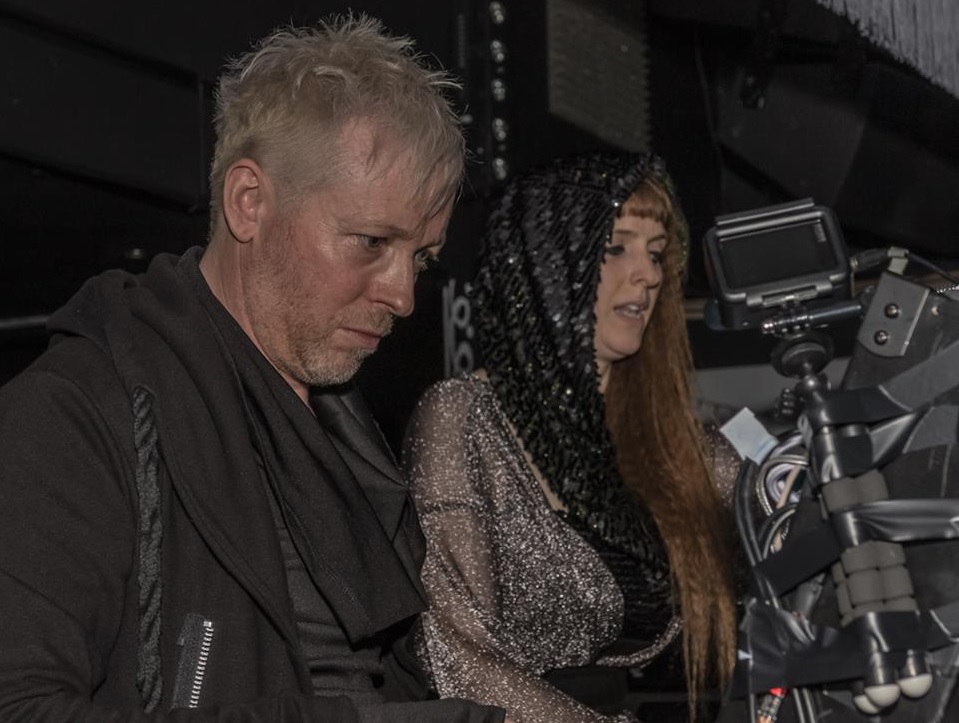 But before I could, we had the delight of the support band, Vile Electrodes. The St Leonards based double act of Martin Swan and Jane Caley have been wowing audiences with their mix of bass heavy sequences, swirling arpeggios and haunting vocals for over ten years and tonight was no exception. 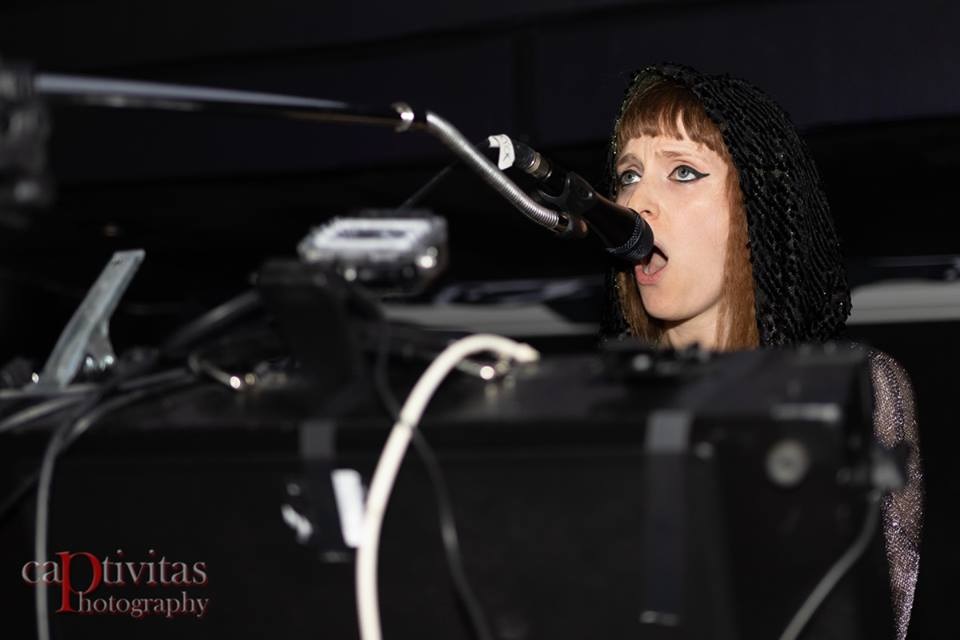 Making the most of the amazing venue, the Viles delivered the most visually stunning gig I have ever seen them perform, with some incredible visual imagery by Daniel Hardiker and Neil Hetherington from ZEROH, which was projected on a giant screen that rose above three sides of the stage. They complimented the driving bass lines and hypnotic vocals perfectly. 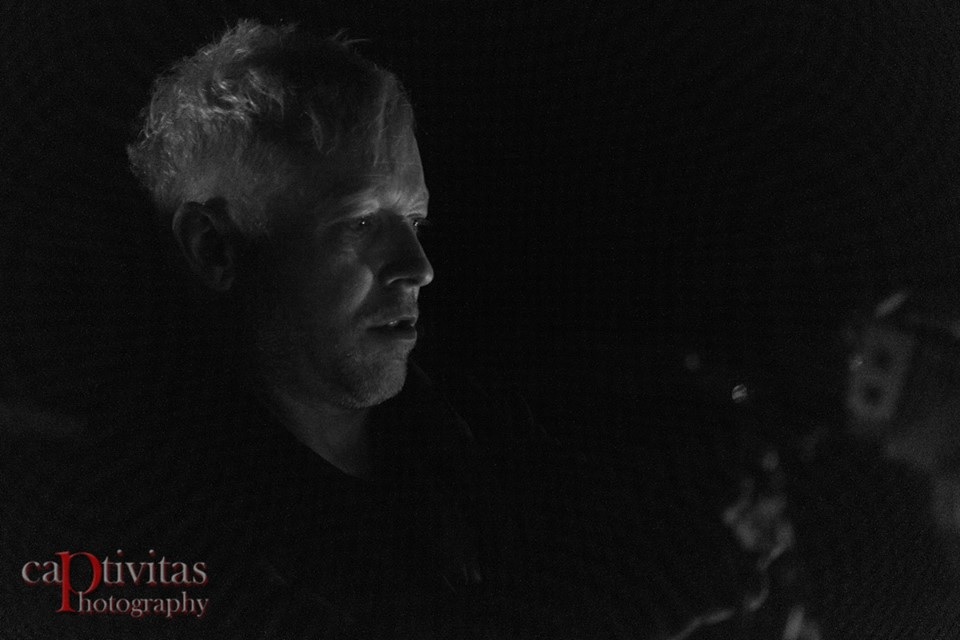 Their set included versions of some fan favourites like ‘Empire Of Wolves’, ‘Incision’ and ‘Re-Emerge’ along with a couple of new tracks called ‘We Are A Prism’ and ‘The Kill The Cure’, which all went down a storm with the packed out audience. The atmospheric ‘Losing Sense of the Light Patterns’, set the scene for 45 minutes of synth filled goodness. The Viles are always amazing live, but tonight I think they turned it up to eleven in honour of the legends they were supporting. 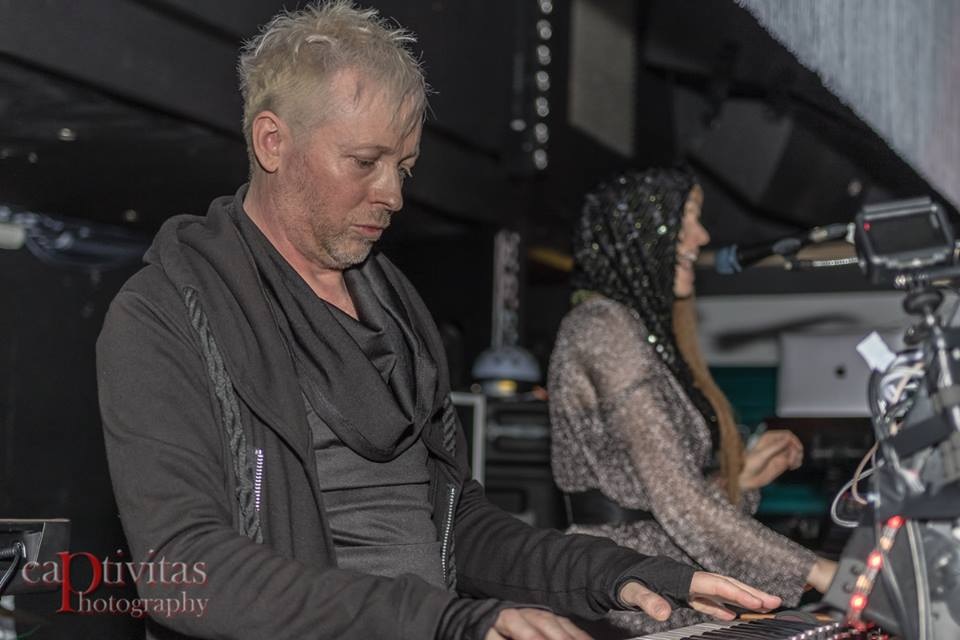 The Vile Electrodes setlist reads:
‘Losing Sense Of The Light Patterns’, ‘Red Bead’, ‘The Quiet Ones’, ‘We Are A Prism’, ‘Empire Of Wolves’, ‘Future Ballad’, ‘The Kill The Cure’, ‘Tore Myself To Pieces’, ‘Incision’, ‘Re-Emerge’. 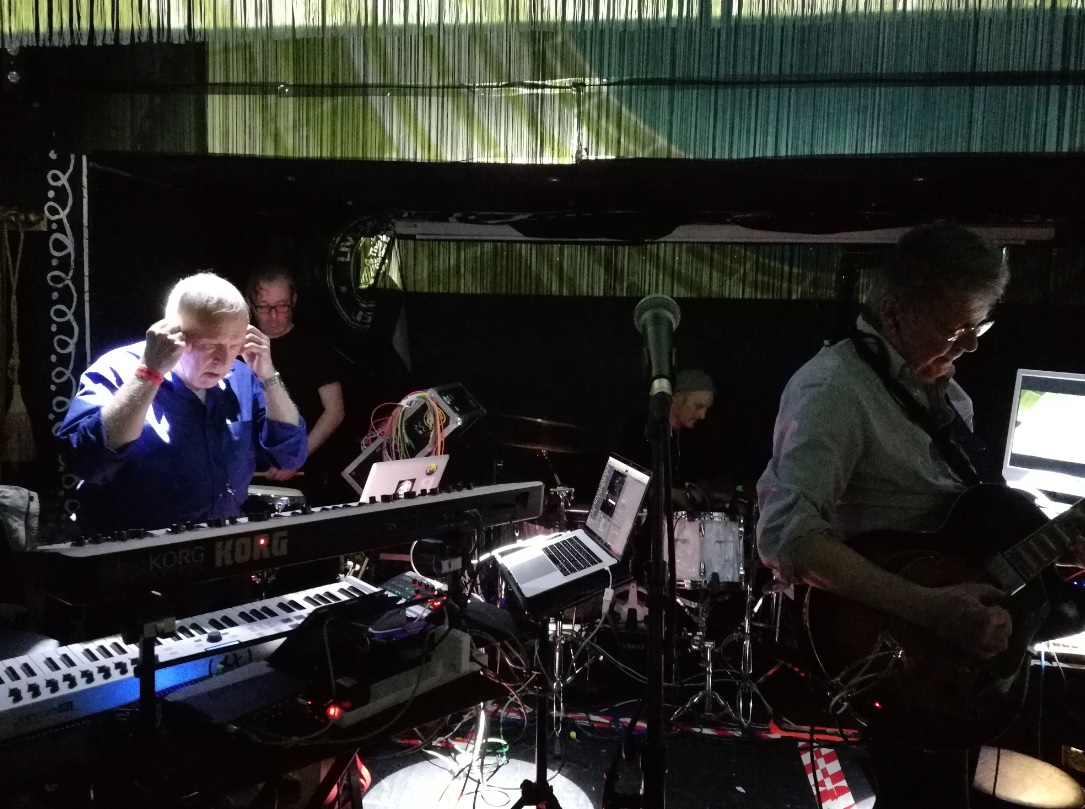 And so to the main event. Comprising of four of the original members and some wonderful new live drummers, the Radiophonic Workshop took to the stage to much whooping and applause. I’ve been a fan of their music since the early seventies and I couldn’t help but feel slightly in awe of being the same vicinity as them. 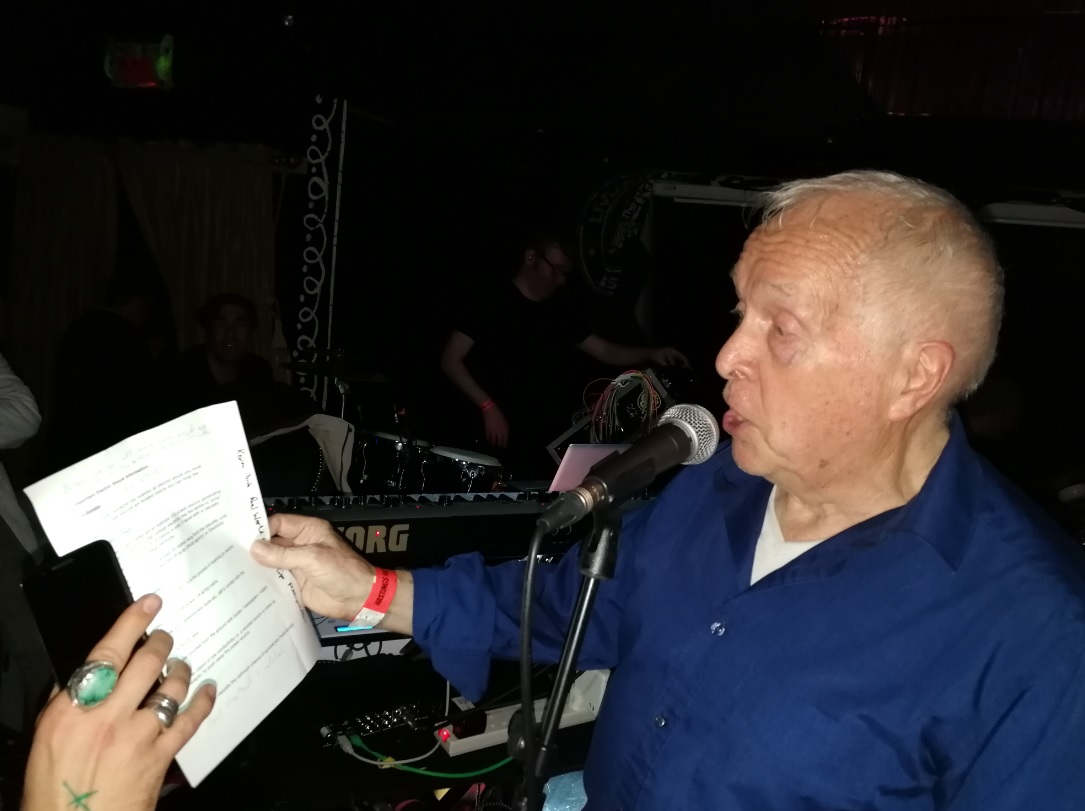 To the left of the stage, we had Roger Limb, who is best known for his incidental music in many Doctor Who serials in the mid 80’s and also had his own version of the theme used during the Sixth Doctor’s tenure in the TARDIS. 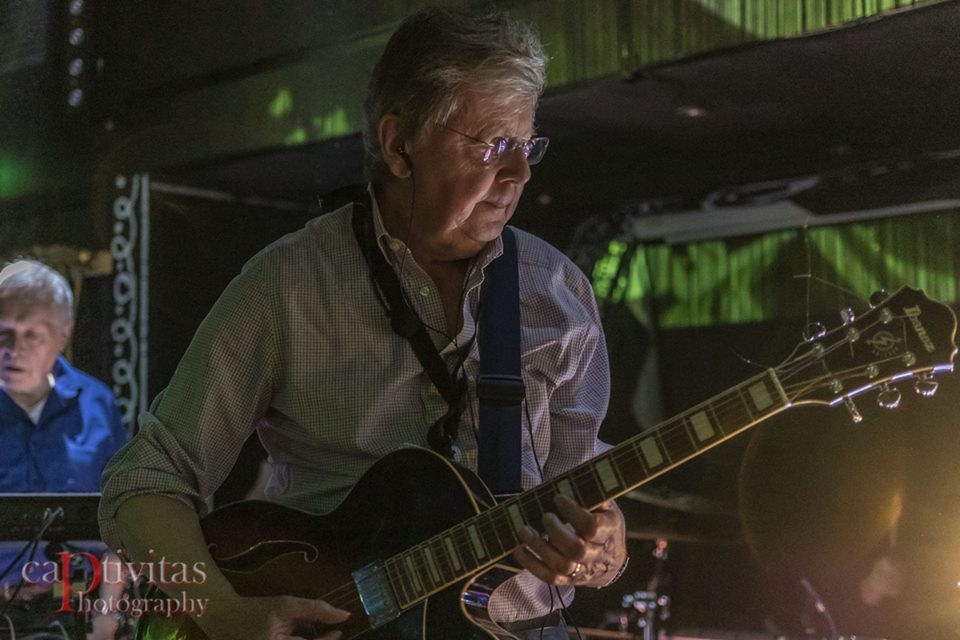 Centre right of the stage was Peter Howell, who again wrote many incidental scores for the show and his version of the theme was used during the final season of the Fourth Doctor and all of the Fifth Doctor’s era. 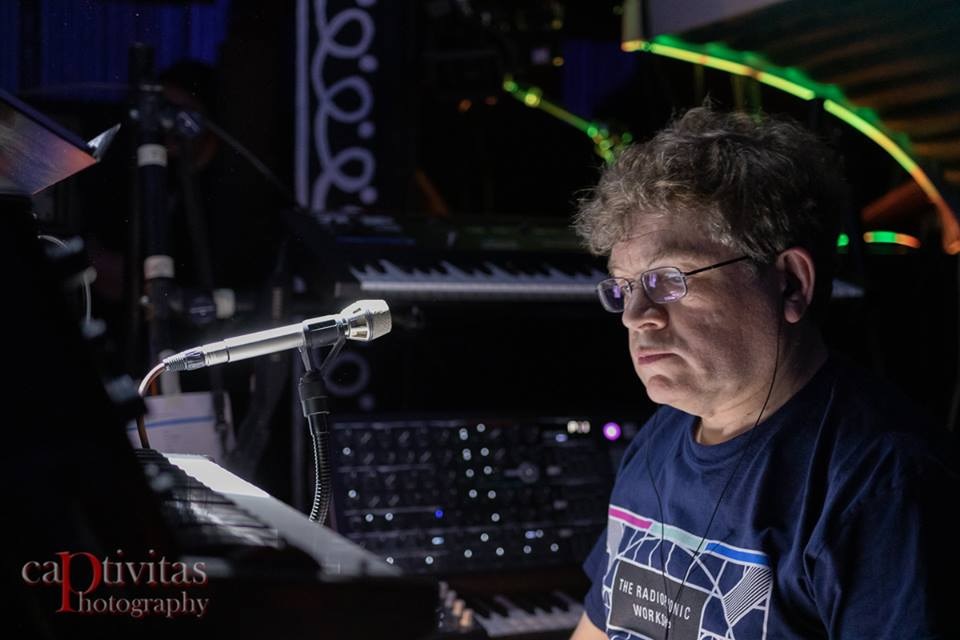 Stage right was Mark Ayres, who is again well known for incidental music across many BBC shows during the 80’s. 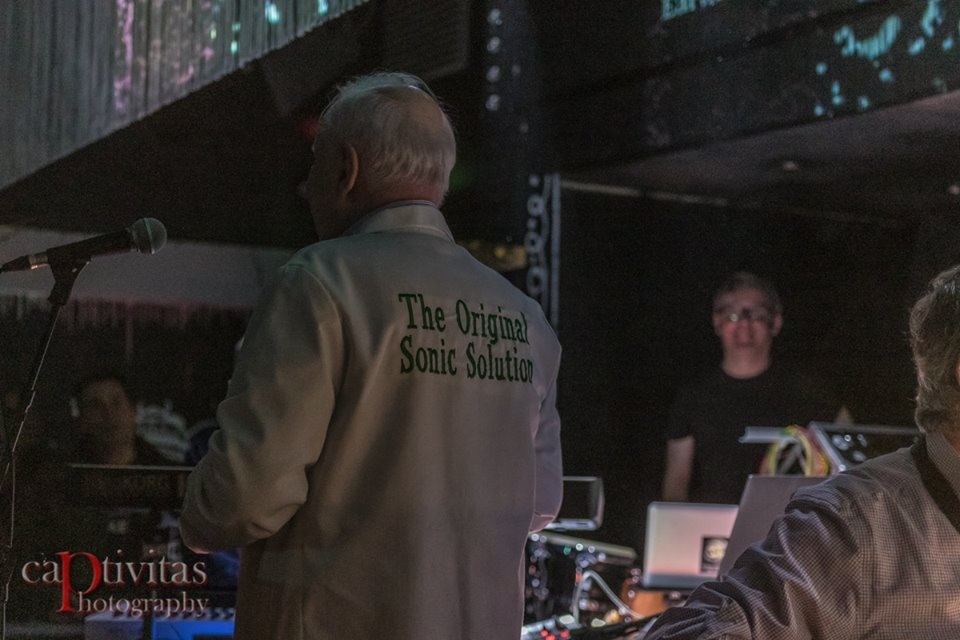 Taking on a supervisory role was Dick Mills, a towering presence in their history. He was one of the original members, joining in 1958 and wrote music for shows such as ‘Quatermass And The Pit’ and ‘The Goon Show’, before going on to do ‘Doctor Who’ in the 70’s.

The stage was flanked by two live drummers, Kieron Pepper (The Prodigy, Dead Kids, OutPatient) and Bob Earland (from Clor), who were a welcome addition to the ensemble.

Sadly, Paddy Kingsland, another huge name in Radiophonic history could not be there due to health reasons. 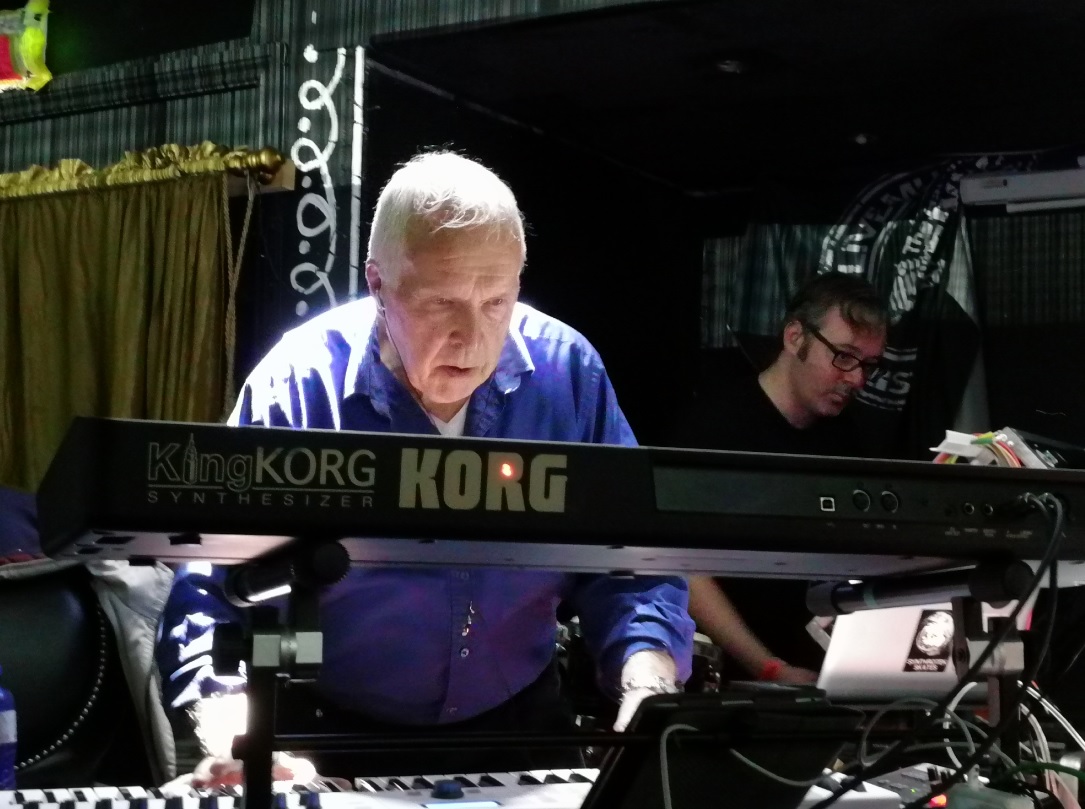 On to the set itself, which was, like the Viles, accompanied by stunning visuals. The sweeping synth melodies took us on a journey through space and time, invoking images of far away planets and alien cultures. But they also told us much more intimate stories, such as the stunning ‘We Would Not Be Here’, featuring the voice of Professor Stephen Hawking. Dick Mills told the crowd that they had approached Hawking because they wanted to use an electronic voice like his in the track and were amazed and thrilled when he offered to do the voice over himself.

‘Burial In Several Earths’ was a version of a tune that the group performed at a Martyn Ware (of Heaven 17 fame) curated exhibition called ‘Picasso By Night’ and was wonderfully haunting. 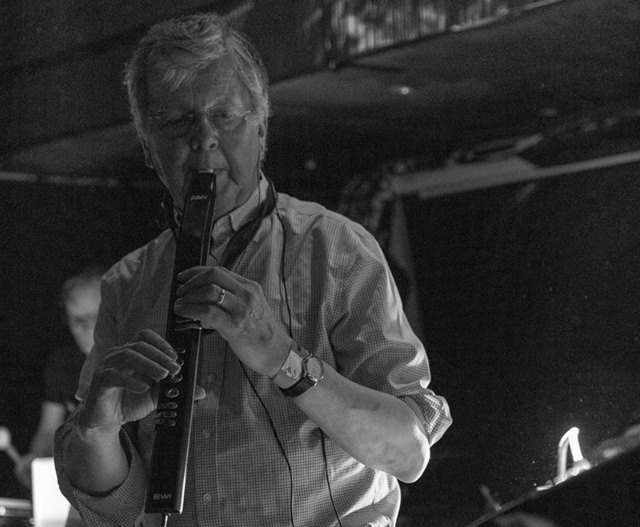 Another highlight was ‘Wireless’, and foot stomping powerhouse of a tune, that led us into the finale, which I’ll come on to later.

The live drummers added a whole new level of oomph to the proceedings and energetic and powerful. 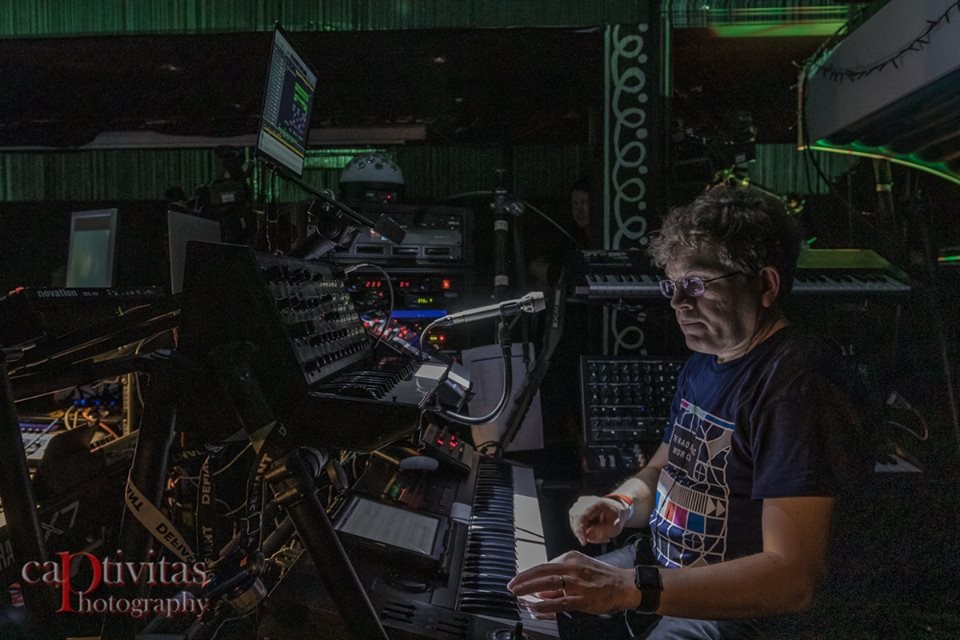 One lovely touch was that the Workshop had asked local people to send in “sounds of Hastings” to them, which they had then turned into a ten minute piece to represent living in the town. It featured spoken words from local fishermen, seagulls and ambient sounds. I noticed a couple of my own recordings in there, which I was greatly honoured by. 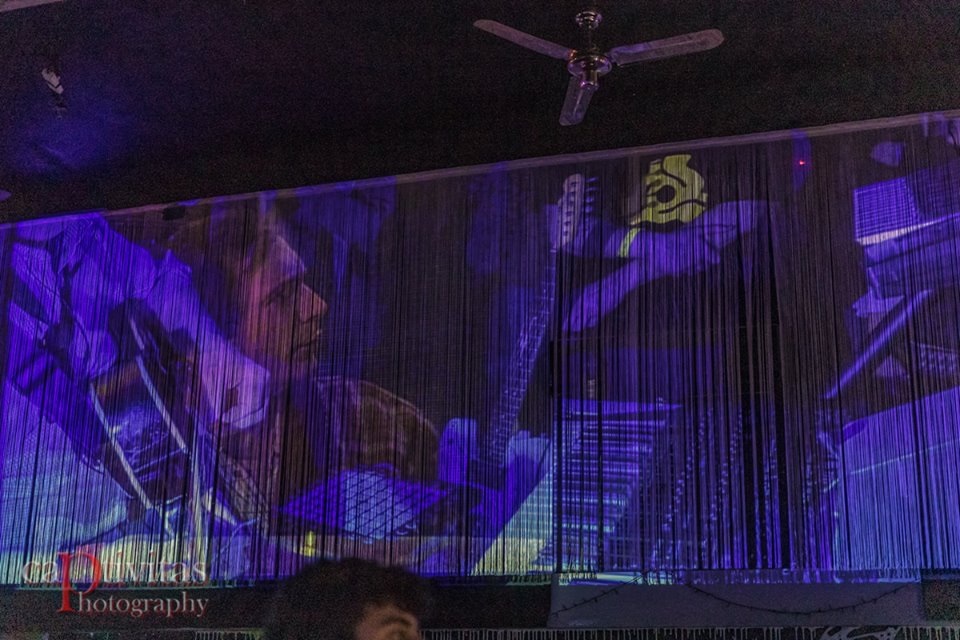 Of course, no Radiophonic Workshop gig would be complete with some of their more well known back catalogue and we were treated to some wonderful incidental music from ‘The Hitchhiker’s Guide to the Galaxy’, complete with visuals of the scene from the 1980’s TV version.

We were also treated to the music from the legendary ‘Test Card’, from back in the days when sometimes, there wasn’t any telly on at all. 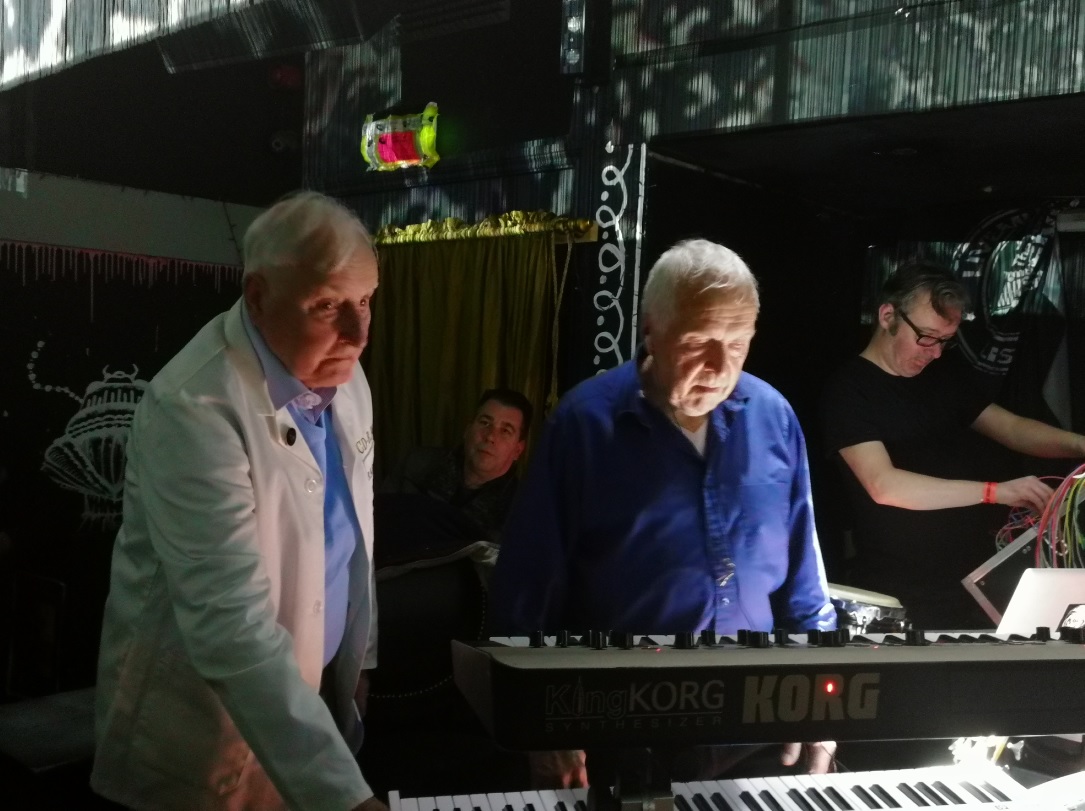 And then the finale, which was possibly the most well known electronic theme tune ever made. ‘Doctor Who’. It started with a recording of the original Delia Derbyshire version from 1963 and then morphed into an epic seven minute twisting and turning exploration of its themes, culminating in the Peter Howell version. Seeing the man himself play the melody right in front of me was pure joy and an absolute highlight of the evening. I am not ashamed to say that his version has been my ringtone for quite a few years so I felt incredibly humbled.

Overall, the evening was a resounding success. The band played for over one and a half hours, longer than many much younger bands do. They commanded the stage and had the audience in the palm of their hand. A truly stunning gig that I will never forget. A triumph for the organisers of Fat Tuesday and I really hope it’s not the last time I get to see them. 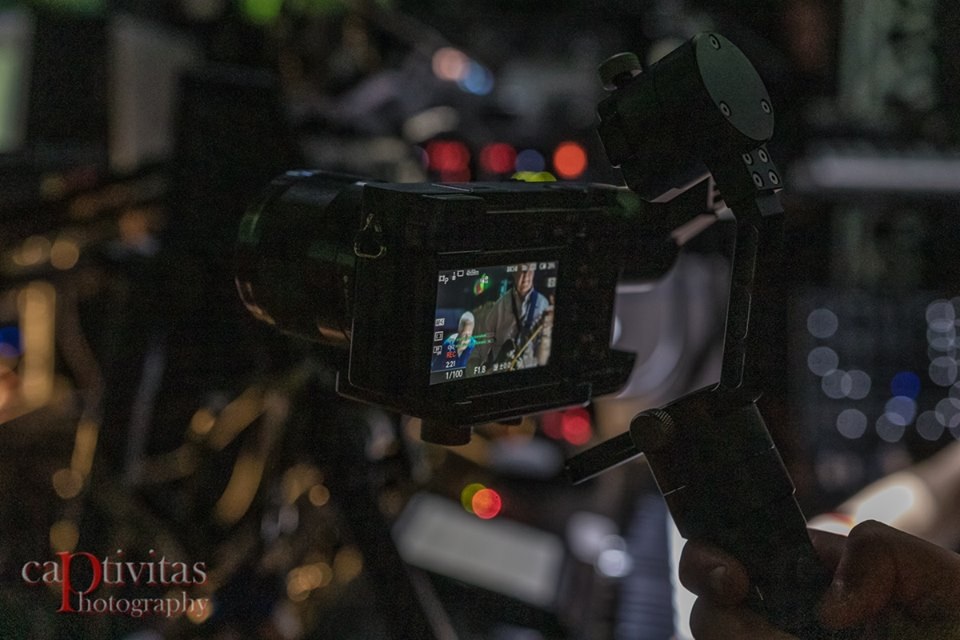