And he took aim at Prime Minister Theresa May’s record on LGBT (lesbian, gay, bisexual and trans) rights when asking his question.

The Labour MP called on Mrs May to condemn Andrea Leadsom, the Leader of the House of Commons, for saying in a radio interview that parents should be able to choose when their children are “exposed” to sex and relationships education.

Mrs Leadsom was answering questions on the LBC radio station about five Birmingham primary schools which have stopped teaching children about LGBT rights after parents complained and held protests.

Mr Russell-Moyle said: “I know that the Prime Minister campaigned to keep section 28 (of the Local Government Act 1988) which banned LGBT from being talked about positively in schools and led to millions of young people such as myself growing up in fear of being LGBT.

“I thought she had seen the error of her ways but this morning the Leader of the House said on the radio that parents should decide when their children should be exposed to LGBT education.

“This is Conservative party dog-whistle politics.

“Will the Prime Minister condemn the Leader of the House and will she condemn bigots who do not want LGBT people to be heard in schools?

“Will she support Ofsted with good LGBT education in our schools?”

Mrs May said: “I am very happy to write to the honourable gentleman with the details of the guidance that is given to schools on LGBT education and teaching.

“My right honourable friend the Minister for Women and Equalities has been at great pains to ensure, working with the Department for Education, that appropriate guidance is given to schools.”

She was interrupted by the noise of angry Labour MPs as she tried to continue with her answer.

She added: “I recognise the issue that he has raised and I will write to him with the details of the guidance because it is very clear about what is appropriate.” 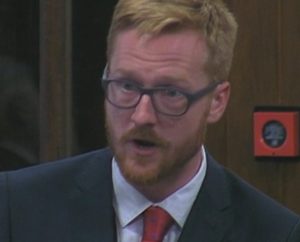 On LBC Mrs Leadsom said: “It’s right that the government should have passed legislation that requires that relationships and sex education is taught in schools.

“But at the same time I also agree that it’s right that parents should be able to choose the moment at which their children become exposed to that information – and there are steps taken to enable parents to withdraw their children from classes up to a certain age.”

She was asked if five-year-olds should receive such lessons and said: “I would be entirely happy for my children to grow up finding that their LGBT classmates are exactly the same as them.

“One of my own kids was in a class with a friend who had two mums and that was absolutely normal right from a very young age.

“It’s important that we absolutely accept equality in every area while at the same time respecting that parents may have concerns about how young their children are when they become aware of these things.”